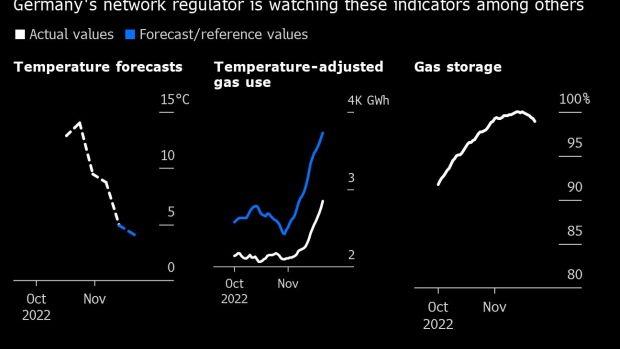 Communal lights on within a block of apartments on a housing estate in the Steilshoop district in Hamburg, Germany, on Wednesday, Oct. 26, 2022. Germany is preparing for a worst-case scenario in which it needs to double financial aid to Uniper SE, the nation's biggest gas supplier, to €60 billion. Photographer Imke Lass/Bloomberg , Bloomberg

(Bloomberg) -- Germany’s network regulator has set out a series of indicators on how the country is monitoring its gas supply, and said the values will be key in determining whether the country is facing an emergency.

“We are making it transparent whether there is an acute threat of a gas shortage,” Klaus Mueller, President of the Federal Network Agency, said in a press conference on Friday.

The country will start publishing a regular new report on the indicators going forward, which they currently assess as “stable.”

The indicators include temperature forecasts, temperature-adjusted gas use, storage, the situation in neighboring countries, and procurement in the wholesale market, and they vary in volatility. Not all indicators have to be in a critical range to announce a gas supply emergency, the network regulator said, and it is still up to the government to declare one.

Europe’s largest economy has been scrambling for gas supplies this winter after Russia cut supplies following its invasion of Ukraine. A postponed heating season has worked in favor of Germany’s gas storage level -- which is currently 99% full -- but an approaching cold spell could test its fragile energy system.

--With assistance from Vanessa Dezem.