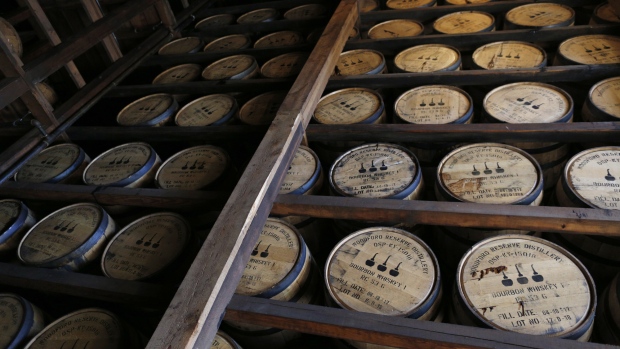 Barrels of bourbon whiskey sit stacked in an aging warehouse at the Brown-Forman Corp. Woodford Reserve distillery in Versailles, Kentucky, U.S., on Thursday, Aug. 23, 2018. Brown-Forman Corp. will have to raise prices for its whiskey sold in the European Union following the implementation of a 25 percent tariff, according to spokesman Phil Lynch. , Bloomberg

After Europe retaliated with tariffs on Kentucky bourbon in response to President Donald Trump’s trade war, the James E. Pepper distillery in Lexington so far this year has suffered a more than 20 per cent sales decline internationally.

“We’re collateral damage,” said Amir Peay, the 42-year-old owner. While tensions may be easing, “what we need is stability. I can’t make long-term decisions about capital allocation, about hiring people, about where to grow my business if I don’t have certainty and stability. We have none of that.”

Kentucky is slowly shaking off a trade hangover, but far from ready to party on.

The Bluegrass state, where 95 per cent of bourbon is produced, has been hurt by retribution from Europe and Asia to Trump’s tariffs worldwide. The export-dependent state ranked 48th among 50 states in growth in personal income in the past year, according to a Pew Charitable Trusts report this week, and its unemployment rate has edged higher.

But the trade disputes are showing signs of progress. Trump is expected as early as this week to delay a decision on imposing auto tariffs against Europe and the president said on Wednesday that trade negotiations with China are progressing rapidly. That’s introduced some guarded optimism among businesses in Kentucky, also a big producer of soybeans and automobiles.

“We are very glad that talks have been useful and proposed tariffs may be delayed,” said Ashli Watts, president of the Kentucky Chamber of Commerce, which represents spirits makers among other companies. “If these tariffs keep being imposed and going down the trail, our economy could significantly shift. We are teetering on this being a much bigger deal.”

The economic fortunes are politically important in Kentucky, where Trump won with more than 60 per cent of the vote in 2016. Democrats claimed victory in Kentucky’s gubernatorial race this month despite last-minute campaigning by Trump, who defended the tariffs in a Lexington stop. Senate Majority Leader Mitch McConnell, who is facing a re-election contest, has warned that a trade war could be counterproductive and hurt the bourbon industry.

Exports of Kentucky bourbon have risen about 5 per cent so far this year, lagging the 25 per cent annual growth since 2016, according to the Kentucky Distillers’ Association. Sales to Europe, the largest market, have declined slightly, compared with 38 per cent annual growth. The state has 68 distillers generating 20,100 jobs with an annual payroll of US$1 billion.

“It is certainly good news if we can see an end to the trade wars,” said Eric Gregory, president of the distillers’ association. Yet he worries some sales will take a long time to recover. Kentucky producers have worked hard to convert European drinkers from Scotch, and those who have switched back may take years to return, he said.

The outlook for agriculture, another pillar of Kentucky’s economy, appears to be looking up as Trump said this week “we’re close” to a deal in which China would buy U.S. farm products.

“We can only hope” for progress, said Davie Stephens, a farmer of soybeans and corn in Clinton, Kentucky, who notes prices have started to recover in the past few months in anticipation of a deal. Farmers have had to delay expansions of land and buying equipment because of the uncertainty, said Stephens, who is president of the American Soybean Association.

“The tariffs have hurt everyone,” he said. “Farmers play the long game, but in the short run there are lots of struggles.”

Kentucky manufacturing also has been pulled down by global trade disputes. While the state continues to add jobs, its unemployment rate has edged up to 4.4 per cent in September, compared to a 3.6 per cent rate for the U.S. last month.

“We are starting to see a little slower growth,” said University of Kentucky economist Mike Clark. “Some firms are postponing investment, waiting to see how things will shake out” with the trade war.

In Lexington, Kentucky, former bartender Peay, a philosophy major in college, acquired an historic but closed distillery, rebuilt it, and now generates “single digit millions” in revenue and is profitable. The 13-employee company continues to gain sales in the U.S., part of a bourbon boom that has also led to increased tourism in the state with visitors stopping at small distilleries, just as they do to sample wine in California.

“It’s a rollercoaster ride” with the trade war, Peay says, noting iconic American products such as Harley-Davidson Inc. motorcycles, Levi Strauss & Co. jeans were also singled out for tariffs. He’d prefer an end to the trade war as opposed to a delay in new tariffs.

“When I start to see a reduction in existing tariffs, I will feel like some progress is being made,” he said. “To simply say we are going to stop stabbing ourselves in the back, OK, great, that’s a start, now take the knives out.”