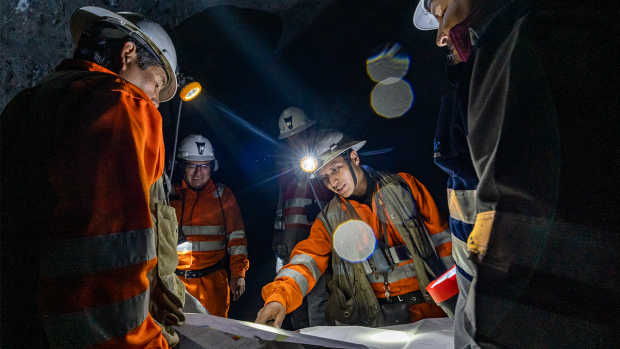 Drill crew at the Tangana Mine.

Although both silver and gold are currently in holding patterns, inflationary pressures in the economy suggest that higher prices are in the cards for these precious metals.

Concurrent with this trend are the consolidation stories playing out in countries across the Western Hemisphere, as precious metals explorers and developers look to capitalize on what could be a bull market.

Now, a company that is intent on building a silver-focused production, development and exploration story with a Peru emphasis just emerged from a merger of equals between Latitude Silver and Oro X Mining.

Given the silver-equivalent resources that they already control in the district, via their 90 per cent interest in the Nueva Recuperada project, Silver X is beginning its life as a public company with a clear plan for growth and a market cap that management feels undervalues its potential.

“Our projects offer exploration upside, and we have a clear plan of action to develop them. We are positioning ourselves to be the next big winner in the silver space, similar to Pan American Silver and First Majestic in previous silver up-cycles.” — Jose Garcia, CEO, Silver X Mining Corp.

Tangana hosts more than 7 million tonnes of inferred silver-equivalent resources. Esperanza features several high-grade veins that were mined for a short period, while Maria Luz is another high-grade system that is currently in bulk sampling.

Silver X CEO, Jose Garcia, is excited about Nueva Recuperada’s potential, noting, “we’re taking a new approach to this district. We just completed the first phase of resource definition drilling on the project.”

The goal is to prove up as much of the project’s inferred resources, which currently stand at 68.3 million Ag-Eq ounces, into the measured and indicated categories. Increasing the confidence level of Nueva Recuperada’s resources will allow the company to put economic parameters around them.

This project includes a past-producing mine and a fully permitted, 600 tpd processing facility, which Silver X is actively ramping towards a 1,200 tpd operation capable of producing 2.3 Moz of silver-equivalent by 2022.

By 2025, Silver X is forecasting Nueva Recuperada to have a 2,500 tpd operation that will see Tangana, Esperanza and Maria Luz all in development. As Garcia notes, “Nueva Recuperada isn’t one project—it’s a batch of projects.”

While Silver X’s focus is clearly on silver, its merger with Oro X has brought a gold-focused project into the fold as well.

Named Coriorcco, the project is also located in Peru and comes with a good bit of historical data and underground development. Historic underground sampling includes rock chips grading as high as 22.9 g/t gold. The average grade from surface sampling, based on 181 samples, was 1.9 g/t.

For those new to gold exploration, the higher grades bode well for a profitable underground operation and the 1.9 g/t average of the surface samples is well above the roughly 1 g/t grades that typically get mined in large open-pit operations.

Coriorcco has some significant vein targets that could turn up more high-grade, particularly at depth below existing exploration levels. Though at an earlier stage than Nueva Recuperada, Coriorcco will see another round of mapping and sampling in 2021, as well as a geophysical survey to identify potential drill targets.

The project also has a sizeable dome target that spans 700 m by 800 m and hosts 17 known veins. Garcia comments, “it’s not flashy, but it’s a good project. We’re looking at drilling Coriorcco in 2022 and, in the interim, we’ll be studying our consolidation options in the area.”

If it sounds like Silver X is hitting the ground running, that is not an accident.

We are Silver X, a Canadian silver company based in Peru and we go #BeyondMining. For more information visit our website here: https://t.co/zi7EPFkfTb

The company’s leadership team has brought together seasoned Peruvian operators from Latitude Silver with a group of veteran dealmakers with the ability to raise capital and deliver shareholder value. Management is strongly aligned with shareholders, with insiders controlling 30 per cent of Silver X on a pro-forma basis.

Indeed, over the last 13 years, the leadership team at Silver X has created more than $3.2 billion in shareholder value. That total stems from buyouts of a half-dozen companies led by Silver X managers, directors and advisers.

A key player from the Oro X side is Paul Matysek, a mining entrepreneur whose past companies have included five publicly listed entities that have sold, in aggregate, for more than $2 billion.

Garcia likes the combination of skill sets that the creation of Silver X has brought together, noting, “the operational team from Latitude is very hands on, and the financial connections, money-raising prowess and impressive track record of Paul Matysek and his group from Oro X is outstanding.”

That team is level-set on turning Silver X into one of the big winners in what it predicts will be silver’s next bull market.

The creation of Silver X included a $14 million equity raise that allowed it to start life as a publicly traded company with a cash balance of $12.2 million. That is money the company can use to advance an environmental impact assessment on Tangana and fund the ongoing 23,000 m definition drill program there.

The company’s near 70 Moz of silver-equivalent puts it squarely in the middle of its peers in terms of cumulative total resources. A Silver X-generated comparison with some key silver producer-developers suggests Silver X’s current market cap could be undervaluing its potential.

With a plan to add value to Nueva Recuperada by expanding operations, optimizing costs, growing resources and exploring for new deposits, Silver X appears well-positioned to grow cash flow from the project in the years ahead and to expand its already sizeable resource base.

Garcia is bullish on Silver X’s prospects, saying “our projects offer exploration upside, and we have a clear plan of action to develop them.

To learn more about Silver X, visit their website here.