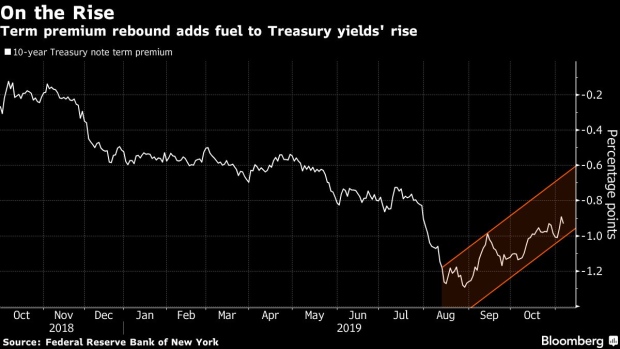 16 Oct 1996: A general view of the red goal light flashing during the game between the Philadelphia Flyers and the Mighty Ducks at the Arrowhead Pond in Anaheim, California. The Flyers defeated the Ducks 4-3. Mandatory Credit: Glenn Cratty /Allsport , Photographer: Glenn Cratty/Getty Images North America

(Bloomberg) -- A bond-market warning light that glowed green for years is suddenly flashing red. The bad news for bondholders is that the last time this happened, it was accompanied by the biggest sell-off since the aftermath of the global financial crisis.

That indicator is the term premium, which, for both Treasuries and German bunds, has snapped back from last quarter’s record lows. The U.S. gauge is now on track for the biggest three-month increase since late 2016.

After a stellar rally through August, global bonds have pulled back in recent weeks as thawing trade tensions lightened the global economic gloom, sapping demand for the safety of sovereign debt. Rebounding term premiums now signal the sell-off has further to run -- the measure of extra compensation for holding longer-term debt versus simply rolling over a short-tenor security for years is in an uptrend that investors and strategists say has only just begun.

The 10-year Treasury yield, a benchmark for world markets, climbed Thursday to a three-month high as investors’ animal spirits were sparked by the ebbing of the biggest headwind to global growth -- the U.S.-China trade war. That came as its German counterpart surged to levels unseen since mid-July and those in France and Belgium climbed back above 0%. The Japanese equivalent jumped Friday to its highest since May.

Investor are increasingly worried about holding longer-term debt as easing economic anxiety raises the prospect of a capital flight out of haven assets into riskier ones. Such a trend is already driving up yields, which, combined with the Federal Reserve’s signal that it will hold interest rates steady for the time being, is boosting term premiums. In Europe, a still-accommodative policy is bolstering inflation prospects, adding to the upward pressure on the gauge.

“Term premium was extremely depressed due to trade uncertainty, Brexit and you name it,” said Roberto Perli, a partner at Cornerstone Macro LLC. “These risks have abated so there is room for about a 50 basis point move higher in term premium. And given the Federal Reserve is on hold -- with no chance of lifting rates - there’s a lot of incentive for investors to take risk.”

Ten-year Treasury term premium has climbed about 42 basis points since the end of August, on track for the biggest three-month increase since 2016, according to the widely followed New York Fed ACM model created by Tobias Adrian, Richard Crump and Emanuel Moench. It rebounded this week to as little as minus 0.84% -- from a record low of minus 1.29% in August, the least for NY Fed data provided back back through 1961.

Understanding the trend in term premium isn’t just an academic exercise for bond wonks as it also helps gauge what’s driving debt yields and valuations. That margin of safety is one of three components that make up the yield of any given bond, according to former Fed Chairman Ben S. Bernanke -- the other two being market expectations for monetary policy and inflation. Basically, it’s an extra cushion against risk over the security’s relatively long lifetime.

To be sure, a resolution to the U.S.-China trade spat still looks far, with President Donald Trump downplaying Friday the amount of progress made in negotiations.

In Germany, the 10-year term premium began a swoon in mid-2014 after ranging from 100 to 250 basis points back since the euro was introduced in 1999, according to estimates by UniCredit SpA strategist Luca Cazzulani, using the methods as in the ACM model.

The gauge for bunds slumped to a record minus 100 basis points at the end of September before rising to minus 88 in October, according to UniCredit data updated at the end of each month. It has likely risen further this month.

“We have seen a continuation of upward in bund yields this month, and that should be related mostly to higher term premium,” Cazzulani said.

Long-term debt has a higher duration that those with shorter tenors. That means that for each move up in yield, prices will fall more sharply than for its short-term counterparts, increasing the risk of being in long-maturity debt.

The European Central Bank’s resumption of fresh bond purchases this month will exert marginal downward pressure on bund term premium, yet won’t be “a game changer,” according to Cazzulani. He estimates that quantitative easing will cause only a five basis point setback in the gauge, which would be too little to counter forces pushing it upward.

After cutting rates and unveiling debt-buying plans last month, the ECB has been pushing for governments to add budgetary support for growth. The prospects of fiscal stimulus along with an ongoing push for more European banking integration bode for more upside for term premium and yields in the region, according to Ronald van Steenweghen, a fund manager at a portfolio manager at DPAM.

“Term premium was driven to levels that were difficult to explain unless you think the economic outlook is very dire, which we don’t agree with,” DPAM’s van Steenweghen said during an interview at the firm’s Brussels office. “And the potential positive feedback loop on the economy of fiscal stimulus is very, very high. This, with stable ECB policy, improving growth and reduced uncertainty all will work to push yields higher.”

The 10-year bund yield is on course to rise from about minus 0.26% to between 0.50% and 1% over the next one to three years, predicted van Steenweghen.

That leaves him “more confident with having a shorter duration stance.”

To contact the reporter on this story: Liz Capo McCormick in london at emccormick7@bloomberg.net

To contact the editors responsible for this story: Paul Dobson at pdobson2@bloomberg.net, Anil Varma, Debarati Roy