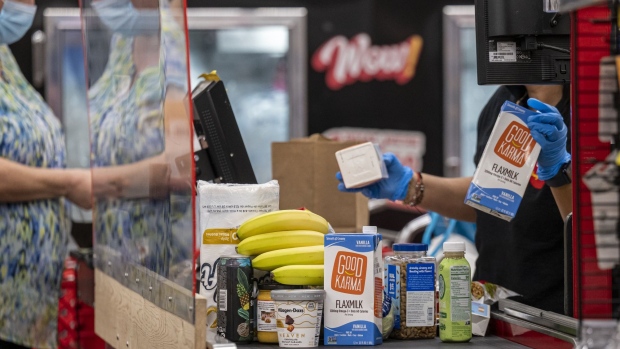 A customer checks out at a grocery store in San Francisco, California, U.S., on Thursday, Nov. 11, 2021. U.S. consumer prices rose last month at the fastest annual pace since 1990, cementing high inflation as a hallmark of the pandemic recovery and eroding spending power even as wages surge. , Bloomberg

(Bloomberg) -- While the crypto horror show rages on, stocks have quietly rallied almost 10% in the last month amid cautious optimism that the worst of the inflation shock is over.

But might it be a head-fake? And what’s in store for equities in 2023? Vincent Deluard, director of global macro strategy at StoneX Financial, joins this week’s “What Goes Up” podcast to talk about why he’s not convinced inflation will fall anytime soon.

Here are some highlights of the conversation, which have been condensed and lightly edited for clarity. Click below to listen to the full podcast, or subscribe on Apple Podcasts or wherever you listen.

5% Inflation for a Decade? (Podcast)

Q: You say the real Fed pivot won’t be to cut rates in 2023, but to accept that a decade of 5% inflation is the least painful way to deleverage the economy, reduce inequalities and restore sustainable growth. How does that play out in markets? And what’s driving that inflation?

A: Let me start on the rates. My view is that the true pivot of 2023 will not be so much the two or three rate cuts that the market currently has priced. I do think we raise to 5% -- and the pace of it ultimately is irrelevant. Maybe these 75-basis-point monster hikes are overkill -- we can probably afford to do a couple 50, even 25. But then rates do not drop after mid-23 like the futures market has it, because inflation doesn’t really drop. And the reason inflation doesn’t drop is because by then inflation will be mostly about wages, and wages, I would expect, will be around 4%, 5% by then.

By May, we’ll get to maybe 4%, 5% inflation. We’ll have a 4% or 5% fed funds rate. So, Powell’s raised the fed funds rate above the rate of inflation -- “mission accomplished.” And then we should never talk again about what happened in 2020 or in 2021 when the Fed was buying $35 billion of mortgage-backed securities when we had the massive housing bubble.

A: Yes. And that wouldn’t be the worst thing in the world. And that’s my point. If you look back at the history of the 2% target, it’s a made-up number. It came from a press conference in New Zealand in the late eighties. There’s no scientific backing behind the 2%. If you look at the distribution of inflation and growth in the US, you’ll actually notice that growth has been actually faster -- real economic growth -- when inflation has been in the 4%-5% range.

You can very well make the case that what really hurts is when you have inflation above 10%, or really unpredictable inflation, because this is when agents can’t plan for the future, investments don’t get made, people hoard stuff. But as long as you have stable, somewhat moderate inflation, whether it’s 2% or 4% or 5% doesn’t really change things. And I think that’s the way most Americans also feel -- most Americans don’t even know what the Fed does, they don’t know about the 2% inflation. They just think of inflation as whatever happened in the past. So that’s where the inflation expectation channel comes in.

A decade of 4%, 5% inflation is really not bad. We are in a period where we have a structurally tighter labor market, mostly because of demography, and also because we no longer have access to Mexican labor. A lot of the great moderation of the past 30 years was with the product of free forces -- on the labor side, you had about 12 million Mexicans that crossed the border between basically the end of the Tequila crisis in 1994 and 2007 -- and this flow was stopped and even reversed since Covid. So we no longer have cheap labor.

On the good side, it was the China shock. If you follow what’s been happening in China right now, this is maybe not where you want your supply chain, and if you just get a demography of China, we’ll have a massive crunch in the population of young workers in China because of the one-child policy. So we don’t have cheap goods from China, we don’t have cheap labor from Mexico.

And then the last part was cheap capital. As the US had these massive deficits in the late 90s, what that meant is that you had all these countries that had very large surpluses -- Europe, Germany, Japan; and then Saudi Arabia, commodity-producing countries. And these surpluses would flow back into the US Treasury market. So for the US it worked great because we basically sent people Treasuries, and then we got goods from them. So it was fantastic. That channel is also clogged now.

So the three factors that made it so easy for us to achieve that 2% inflation are gone -- cheap labor, cheap goods, cheap capital. So it would be a lot harder to get down to 2%. I mean, I’m sure we could, like, if Powell wanted to be Volcker and he gets the fed funds right to 10%, we get to 2%. But what’s the point? Why would you want to destroy the labor market?

Click here to listen to the rest of the interview.

--With assistance from Stacey Wong.