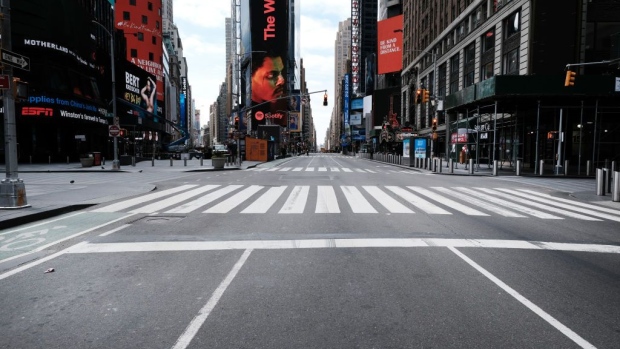 (Bloomberg Opinion) -- I have long been an enthusiastic defender of quantitative cost-benefit analysis, and recently wrote a book about it.

I have also long been a critic of the precautionary principle, which calls for potentially expensive precautions against bad outcomes in the face of scientific uncertainty.

In the context of the coronavirus pandemic, it’s unusually challenging to engage in quantitative cost-benefit analysis. But the best available estimates, released within the last few days, suggest that the U.S. should continue with expensive precautions, even if they take a major economic toll.

Back to normal by Easter, as President Donald Trump suggested? The new estimates show that that would be reckless. To adapt Patrick Henry, “Give me precautions, or give me death.”

It should be acknowledged that Trump, and many others, have been right to emphasize the importance of balancing a range of considerations, and not focusing only on one.

Some people in the public-health community like to look only at one side of the ledger. But a zero-risk mentality makes no sense.

Under both Republican and Democratic administrations, regulatory agencies have relied on a monetary figure to capture “the value of a statistical life.” It is now around $10 million. Monetizing human life seems cold-hearted; our intuition rebels against it. But it’s essential.

With that number, agencies are not saying that any particular life is worth $10 million. In increasing highway safety and workplace safety, regulators deal with statistical risks of death, not with the question how much money should be devoted to saving your daughter or your mother. They are relying on research finding that to face a statistical risk of death of (say) 1 in 10,000, Americans would demand, on average, about $1,000. That leads, with a little multiplication, to the $10 million figure.

You can ask a lot of questions about that research. But it’s clear that in choosing whether to proceed with lifesaving regulations, or how aggressively to proceed, agencies will be required, if only implicitly, to assign some monetary figure to risks of death. In deciding how to handle risks in the workplace, or risks from air pollution, regulators cannot avoid the existence of trade-offs. They aren’t going to spend billions of dollars to prevent one or two deaths, or even 10 or 20.

Which helps to point out what’s wrong with the precautionary principle, at least as many people understand it: It’s self-defeating. It forbids the very measures that it requires.

If you take too many precautions against risks — for example, by banning automobiles — you are going to create different risks. Expensive precautions, by virtue of their expense, can endanger human beings — among other things, by increasing poverty and unemployment, which would mean more death. If we care about human welfare, we will insist on exploring the costs and benefits of various approaches, because the resulting numbers give us indispensable information.

Turn to the coronavirus pandemic in this light. The costs of the pandemic greatly outrun the death toll of Covid-19. They include serious illness short of mortality, fear and anxiety, reductions in business activity, spells of unemployment and much more. But as with health and safety regulation in general, so, too, here: If we aim to capture the benefits of protective measures, it makes sense to start with mortality.

Doing exactly that, Michael Greenstone and Vishan Nigam of the University of Chicago analyzed the likely benefits of “a moderate form of social distancing,” including a seven-day isolation for anyone showing coronavirus symptoms, a 14-day voluntary quarantine for their entire household and dramatically reduced social contact for all those over 70 years of age. They found that over a period of seven months, the result would be to prevent 1.7 million deaths. Under standard assumptions, that’s $17 trillion in benefits. Because a significant percentage of the avoided mortalities involve older people, Greenstone and Nigam adjusted the number down — but still, it’s over $8 trillion, which is the equivalent of $60,000 per U.S. household.

Looking at costs as well as benefits, a team of economists at the University of Wyoming, led by Linda Thunstrom, reached broadly similar conclusions.

They explored the effects of a more aggressive understanding of social distancing, including closing schools and universities and cancellation of cultural events and sports leagues.

Like Greenstone and Nigam, Thunstrom and her colleagues offered a lot of numbers, but their bottom line, driven in large part by deaths prevented, is clear: The net benefits (benefits minus costs) are about $5 trillion.

The researchers emphasized that their numbers depend on assumptions about the rate of infections over time and the speed of the recovery. If, for example, the rate of the recovery is very slow (and thus if the economy collapses for a very long time), the costs of social distancing start to explode, and those $5 trillion in net benefits get eaten up. But under the most reasonable assumptions, the benefits of aggressive social distancing greatly exceed the cost.

In a period when a lot of human beings are getting sick and dying, it might appear callous to rely on statistics, and especially the monetary valuation of human life, to help make fundamental decisions. Generating reliable numbers is especially difficult in the face of high levels of both scientific and economic uncertainty. But on the basis of current knowledge, extensive precautions, not ending soon, are amply justified by the most hard-headed forms of analysis that we have.

Cass R. Sunstein is a Bloomberg Opinion columnist. He is the author of “The Cost-Benefit Revolution” and a co-author of “Nudge: Improving Decisions About Health, Wealth and Happiness.”