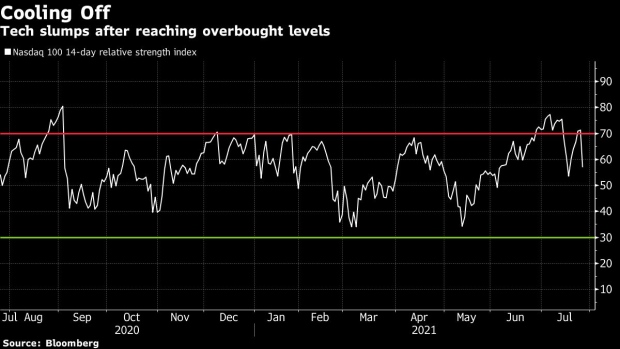 (Bloomberg) -- The Nasdaq 100 Index trades for 38 times earnings. Abby Joseph Cohen says it’s a market with “no margin for error.” It’s only July, and the S&P 500 Index has put in a gain that most fund managers would consider a stellar year.

So when big drops like Tuesday’s land with no obvious bad news to explain them, it’s useful to consider how far the market has already come.

“It’s priced to short-term perfection,” said Kim Forrest, founder and chief investment officer at Bokeh Capital Partners. “Was yesterday the high? Because that’s what everyone is acting on. I don’t believe yesterday was the high of the year,” she added, citing views on earnings over the next six months.

What caused the selloff? The usual panoply of explanations was rolled out. Rising Covid angst. Earnings that were good but not extraordinary. China’s hardships seeping outward, possibly via motivated selling by investors holding losses there. Each was plausible. Each had been true for days without troubling the record-breaking rally.

The S&P 500 fell 0.5% on Tuesday and the Nasdaq 100 posted its worst showing since May 12, down 1.1%. The tech-heavy gauge had reached oversold levels heading into Tuesday’s session, with its 14-day relative strength index clocking in above 70.

“By now we’re all familiar with the reasons to be bullish on equities, but many of these factors were priced in several months ago,” said Adam Phillips, managing director of portfolio strategy at EP Wealth Advisors.

Investors have been particularly demanding of companies reporting earnings. Look no further than Tesla Inc.: the electric-vehicle maker posted record sales and topped analyst estimates in its second-quarter report on Monday, with profit more than tripling on an adjusted basis. Still, Tesla shares tumbled as much as 4.6% the following session, with JPMorgan Chase & Co. analysts saying that the company’s lofty valuation leaves little room for “less-than-perfect execution.”

Shares of Apple Inc., Microsoft Corp. and Alphabet Inc., which are among the top five heaviest-weighted stocks in the S&P 500 and are also set to post earnings updates Tuesday, also sank. For this earnings season through Monday, companies that missed on both profit and revenue forecasts underperformed the market by an average 3.5%, versus the average decline of 3.1% over the last 10 years, according to Credit Suisse.

Summertime volatility might be expected, if history is any guide. Going back to 1983, the S&P has tended to start July off on a positive note and has historically traded higher throughout the first half of the month. Then, toward the end of the third week, the index tends to stall out and decline into the fourth week before closing out on a higher note, according to Bespoke Investment Group. Over the last decade, the gauge has been even stronger in the first half of July but, similar to the longer-term pattern, the rally stalls out in the second half of the month.

Mike Bailey, director of research at FBB Capital Partners, said he didn’t see any fundamental reasons for concern, but that “typically in the summer, people are away, fewer traders, you have less liquidity.” He added that so far it’s been “a picture-perfect 2021.”

In fact, the S&P 500 has hit a new high 41 times during its 17% advance since the end of December. And with investors conditioned to buy the dip amid still-massive support from the Federal Reserve, any recent selloff has been shallow and quick. The S&P 500 has gone 182 days without a 5% drawback, according to Bespoke.

“Anyone selling now has to be pretty happy booking their gains -- no one goes broke taking profits,” said Bryce Doty, portfolio manager at Sit Fixed Income Advisors. “Sure, we can have a pullback in the stock market, people can take some profits, but it’s not going to turn into a rout. And if it goes much further, I would see that as a buying opportunity.”