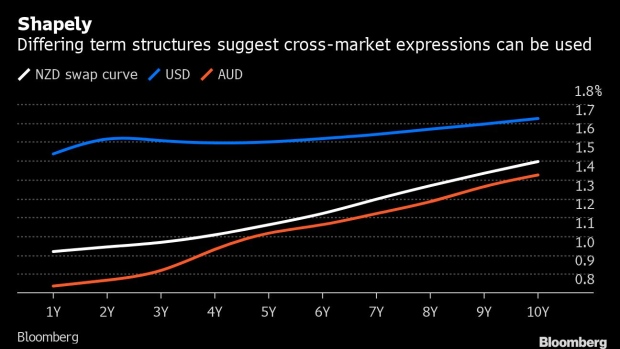 (Bloomberg) -- Traders looking to profit from diverging bond markets will focus on New Zealand this week where the prospect of an interest-rate cut is on a knife-edge. Relative stability in the U.S. and Australia suggest cross-market trades are the best expression.

As little as a month ago, overnight swap markets were predicting a rate cut at the Reserve Bank of New Zealand meeting on Wednesday would be a certainty. The odds have now sunk to about 60% as progress in U.S.-China trade talks boosted global sentiment. Westpac Banking Corp. also played a part by scrapping its forecast for policy makers to reduce rates in November.

At the same time, there are still some clear reasons for further easing. Economic data has stabilized but not improved, while the RBNZ has signaled its intention to keep ahead of the curve, as shown by its unexpected 50 basis point rate cut in August.

The swing back toward an uncertain outcome has seen New Zealand’s swap curve -- as measured by the spread between two- and five-year tenors -- widen to 13 basis points from a 10-year low of -0.005 basis points in August.

One way traders will be playing this week’s RBNZ decision will be bet against relative changes in the yields curves of New Zealand and those of Australia and the U.S., where the outlook for central bank policy appears much more predictable.

There’s still room for Australia’s benchmark interest rate to fall but only a little. Markets are anticipating the RBA will be reluctant to lower its benchmark below 0.50%, just 25bps below current levels. The final rate cut is far from a done deal as overnight swap markets are pricing it at about 60% for the middle of next year.

One of the RBA’s most closely-watched monthly releases -- unemployment data -- is due on Thursday. Regardless of the outcome, the front-end of Australia’s yield curve seems destined to flatten.

A strong beat in the jobs number may kill off lingering expectations for a rate cut, pushing front-end yields higher and flattening the curve. A miss, and traders will look past the expected rate cut and prepare for what might come next: unconventional policy. That would be bullish for longer bonds, and also flatten the curve.

In the U.S., the Federal Reserve sees the consumer as strong, which puts plenty of emphasis on retail sales figures due Friday. The central bank hit the pause button after its October rate cut, prompting swap markets to push back pricing for the next cut to the end of 2020.

This means the front-end is pinned for the time being, though a solid print may push short rates higher and flatten the curve. Key levels in bonds also appear to be holding and yield hungry investors are stepping in to buy further out the curve, just look at last week’s blockbuster 10-year sale.

With U.S. and Australian yield curves primed for a phase of gentle flattening, New Zealand’s might be poised to steepen, depending on what the RBNZ decides on Wednesday. Cross-market trades may be back.

To contact the reporter on this story: Stephen Spratt in Hong Kong at sspratt3@bloomberg.net