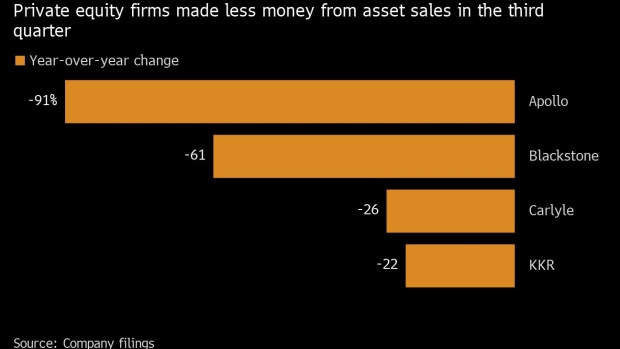 (Bloomberg) -- Thoma Bravo LLC raised $32.4 billion for three new tech-focused funds in one of the biggest hauls by a private-equity firm this year even as some rivals struggle to close out funding rounds.

The Chicago-based company’s latest fundraising was 42% higher than its previous efforts, which closed with $22.8 billion in 2020, according to Jennifer James, the firm’s chief operating officer and head of investor relations.

The massive fundraise comes amid one of the most challenging years for private-equity firms following several years of strong investor interest buoyed by market rallies and low interest rates. Apollo Global Management Inc. for instance has pushed back the timeline for its $25 billion fund and will continue collecting money into next year.

The firm, which runs more than $120 billion in assets, took 10 months to raise the funds, and nearly all investors in predecessor funds committed capital to the new ones, according to James.

The firm’s fundraising didn’t appear to be hampered by its investment in FTX Trading Ltd., the operator of crypto exchange FTX.com, which collapsed this month. Thoma Bravo declined to comment on the FTX investment, which saw the firm participate through its growth fund in a $900 million Series B fundraising in July last year.

The current market conditions, while challenging, provided Thoma Bravo an opportunity to buy software companies at better prices, James said. The software sector will continue to be resilient as more companies focus on digital transformation, she said.

Deal making in private-equity is at its lowest in two years, though Thoma Bravo managed to exit several of its investments this year. Those included the sale of Barracuda Networks Inc., a cybersecurity service provider, to KKR & Co., and Kofax Ltd., a maker of automation software for digital workflow. The Thoma Bravo buyout funds distributed over $8 billion to its limited partners this year, James said.

As of March 31, Thoma Bravo’s Fund XIV generated an internal rate of return of 1.8% since inception, according to documents from the Santa Barbara County Employees’ Retirement System. Its Fund XIII, which closed with $12.6 billion in 2019, generated an IRR of about 42% as of March 31, the documents showed.

The firm, with offices in Miami and San Francisco, was co-founded by Orlando Bravo and Carl Thoma.