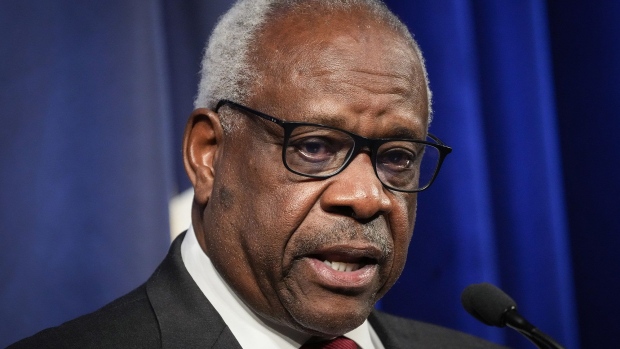 (Bloomberg) -- Justice Clarence Thomas said the leak of a draft US Supreme Court abortion decision has done deep damage to the institution, undermining trust among its members and causing people to “look over your shoulder.”

Speaking at a conference in Dallas on Friday, Thomas said the disclosure has exposed the “fragile” nature of the court, the Washington Post and other news organizations reported.

“When you lose that trust, especially in the institution that I’m in, it changes the institution fundamentally,” Thomas said in an excerpt posted by CNN. “You begin to look over your shoulder. It’s like kind of an infidelity that you can explain it, but you can’t undo it.”

The draft opinion would overturn the landmark 1973 Roe v. Wade decision, which established a constitutional right to abortion and legalized it nationwide. Politico published the draft decision this month and said five of the nine justices, including Thomas, had preliminarily voted with the majority.

A decision overturning Roe would likely cause abortion to be outlawed in more than two dozen states, including 13 with so-called trigger laws that would automatically take effect. Other states have pre-existing abortion bans, some dating back more than a century.

The leaked opinion has sparked protests at the homes of justices, a tactic Thomas said conservatives never employed.

“You would never visit Supreme Court justices’ houses when things didn’t go our way,” Thomas said. “We didn’t throw temper tantrums. I think it is incumbent on us to always act appropriately and not repay tit for tat.”

Thomas, whose 1991 confirmation hearing included a bitter fight over accusations that he had sexually harassed a subordinate, said conservatives “never trashed a Supreme Court nominee.” He said Merrick Garland, whose 2016 nomination by President Barack Obama was blocked by Senate Republicans, “did not get a hearing, but he was not trashed.”

Thomas has been at the center of controversy this year after the revelation that his wife, conservative activist Virginia Thomas, repeatedly pushed former President Donald Trump’s chief of staff to do more to overturn his election loss to Joe Biden.

Critics have said that, at a minimum, the justice should have recused himself from cases involving the 2020 election, including a decision that let some Trump papers be turned over to a congressional panel investigating the Jan. 6, 2021, attack on the US Capitol. Thomas was the lone dissenter from that order, giving no explanation.

Thomas made his remarks at a conference sponsored by three conservative and libertarian groups: the American Enterprise Institute, the Manhattan Institute and the Hoover Institution. He spoke in a conversation with John Yoo, a University of California, Berkeley, law professor who clerked for Thomas in the 1994-95 Supreme Court.