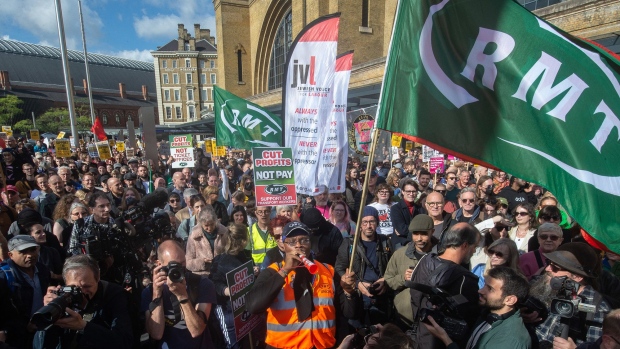 A series of protests filled the streets of the largest UK cities on Saturday, with people rallying for causes ranging from a cost-of-living crisis and pay rises to protecting the climate.

Across Britain, in cities including London, Edinburgh, Swansea and Liverpool, protesters gathered for marches coordinated by the campaign Enough is Enough. They are demanding support to face surging prices, in the form of real pay rises, slashing energy bills and taxes for the wealthy, according to a manifesto on their website.

About 10,000 people took part in the London rally, according to a tweet by the campaign. Joining in was climate group Extinction Rebellion (XR), which said it was marching to stand against both climate change and the cost-of-living crisis. Activists said they blocked Westminster bridge.

The protests coincided with the beginning of a strike coordinated by the National Union of Rail, Maritime and Transport Workers (RMT). The national walk-outs, scheduled for Oct. 1 and Oct. 8, will see 40,000 RMT members across the country “effectively shutting down the railway network,” the union said in a statement on its website.

The strikes come after a lack in progress in negotiations between the union and the rail network, with the latter failing to address employees’ concerns on the rising costs of living and the threat of mass redundancies, the RMT said.

The protests follow a recent mini-budget from new Prime Minister Liz Truss’ government, which capped energy costs but also cut taxes, including scrapping the top rate for the highest earners. The campaign groups say that’s been a catalyst for protesters as the policies are seen as adding to inflation and widening inequality.