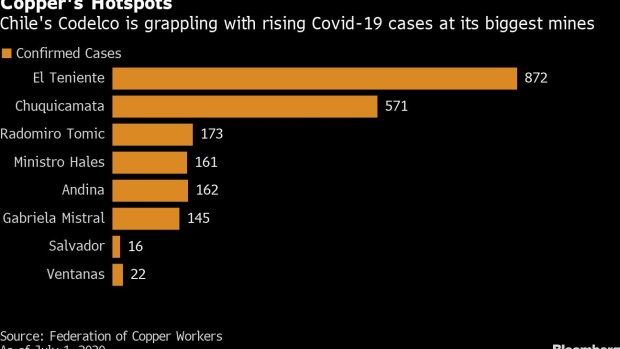 (Bloomberg) -- It’s no coincidence that global copper prices and Chilean Covid-19 cases are rising together.

Chile, which accounts for more than a quarter of global supply, is battling to maintain output levels as more workers fall ill amid a nationwide surge of infections.

Mines have been attempting to keep their workers safe without forgoing too much output by postponing non-essential activities such as maintenance and construction work. Fewer workers on site mean less risk of infection.

But cases keep rising, and unions and local politicians are calling for tighter restrictions. With Chilean supply risk growing at a time of recovering Chinese demand, the price of copper is back to near where it started the year.

At Codelco, for example, 2,433 workers have been diagnosed with the disease, according to data compiled by the Federation of Copper Workers union.

To be sure, that’s still a small fraction of the state-owned company’s total workforce of 70,000-plus, including contract workers. But it’s more significant as a percentage given mines are already operating with skeleton crews. While Chile has managed to reduce the number of daily infections nationally, cases continue to grow in some key mining areas.

Codelco’s hardest hit mines are El Teniente and Chuquicamata, with 872 and 571 cases, respectively, as of July 1, according to the union.

The state behemoth has halted development projects at El Teniente, its largest mine, adding to other curtailments and shift-pattern changes. At Chuquicamata, Codelco suspended smelting and sharply reduced refining. BHP Group announced plans last week to scale back its Cerro Colorado mine.

While Chile managed to maintain output at high levels in May, the first clear view into how it fared in June comes on Tuesday, with monthly export data.