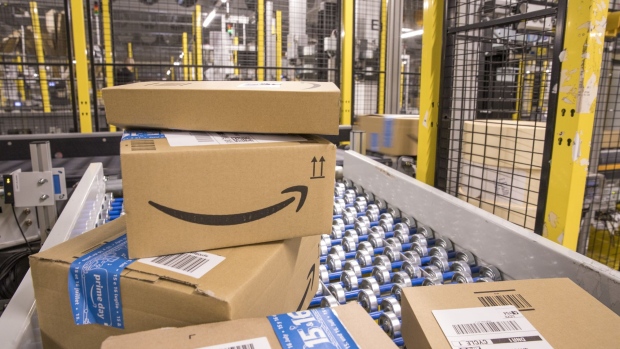 Packed boxes pass along a conveyor belt at the Amazon.com Inc. fulfilment centre in Tilbury, U.K. on Friday, July 12, 2019. By offering 12 extra hours of deals during this year's Prime Day, Amazon will pull in nearly 50% more in sales, according to an estimate from Coresight Research. Photographer: Jason Alden/Bloomberg , Bloomberg

(Bloomberg) -- Thrasio Holdings Inc., an aggregator of Amazon.com Inc. products, has raised more than $1 billion in a private funding round led by technology investor Silver Lake.

Silver Lake, a new investor in Thrasio, was joined by existing investors including Advent International, Upper90, Oaktree Capital Management and Peak6 in the Series D financing, according to a statement. The round valued the company at more than $5 billion, said a person familiar with the matter who asked not to be identified discussing private information.

Stephen Evans, managing partner at Silver Lake, said a lot of the capital from the round will go toward rolling up brands.

Thrasio had held merger talks with Michael Klein’s Churchill Capital Corp. V, a special purpose acquisition company, or SPAC, for a deal that would have taken it public, Bloomberg News reported in June.

“For us, it’s a decision about capital raising, you have to be ready,” co-founder and co-Chief Executive Officer Carlos Cashman said in an interview. “Going public is a capital raising episode and so far the private market has continued to provide us with ample amount of capital.”

The SPAC merger, which would have valued the combined company at more than $2 billion, fell apart amid departures of top executives, CNBC reported.

Thrasio co-founder Joshua Silberstein also serves as co-CEO, according to the company’s website.

“Being co-CEO is a pretty unique structure for any company, we never intended for that to continue for the long term,” Cashman said. “It’s a natural evolution.”

The three-year-old brand aggregator is set to have $1 billion in revenue, he said.

Currently Thrasio operates on Amazon’s platform in the U.S. as well as Japan and Europe. It plans to expand to India and explore other online retail platforms, Cashman said.

Last month Thrasio announced a $650 million debt facility via JPMorgan Chase & Co. The company’s last private funding was in July 2020, when it was valued at $1 billion before the new financing.

The company buys consumer products on marketplaces such as Amazon. In September, it announced its biggest set of transactions yet -- totaling $100 million. It bought makers of mattress protectors, camping equipment and home-bedding.

JPMorgan advised Thrasio on the funding round, according to the statement.