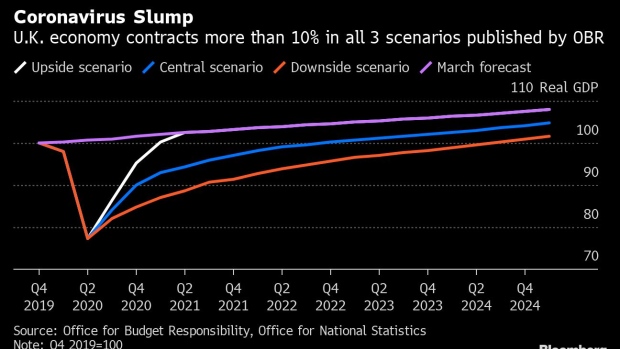 Rishi Sunak, U.K. chancellor of the exchequer, departs from number 11 Downing Street on his way to give an economic update to Parliament in London, U.K., on Wednesday, July 8, 2020. Sunak is set to unveil a 2 billion-pound ($2.5 billion) program to pay the wages of more than 200,000 young workers as he tries to pull the U.K. economy out of the deepest slump in centuries. , Bloomberg

(Bloomberg) -- U.K. Chancellor of the Exchequer Rishi Sunak’s record spending plans to support the economy this year may not prevent the biggest spike in unemployment in more than three decades.

Data on Tuesday showed the gross domestic product expanded much slower in May than expected. The nation’s fiscal watchdog followed that with predictions that laid bare the damage that threatens to scar the economy for years to come. Unemployment could surge to 12% at the end of this year and, under the worst-case scenario, could peak at 13.2% early in 2021.

Both outcomes would see more than four million people losing their jobs -- an unprecedented level.

The figures didn’t take into account Sunak’s pledge last week, which totaled 30 billion pounds ($38 billion) of extra spending to revive growth and protect jobs. That package, however, was criticized for not being far-reaching enough to shield industries particularly hammered by the pandemic. He has also ruled out extending the centerpiece of his plans -- a furlough program paying a portion of workers’ wages -- beyond the end of October.

“With unemployment projected to match -- or even surpass -- its 1980s peak, the Chancellor has taken a significant gamble in not setting out more support for demand and employment in the hardest-hit sectors of the economy,” said James Smith, Research Director at the Resolution Foundation. “The risk of 1.3 million furloughed workers moving straight into unemployment should prompt the Chancellor to consider further action on jobs.”

Even for a popular finance minister who has publicly said he can’t protect every job, the risk of a double-digit joblessness rate could be politically damaging. Prime Minister Boris Johnson put creating jobs in the country’s poorest areas -- which are set to bear the brunt of the downturn -- at the heart of a campaign that secured him a landslide election win last year.

A slower rebound could force the chancellor to reconsider his pledge to end the job support program in October by the time he presents a much-anticipated budget update in the fall. The opposition Labour Party has already urged him to at least continue to support the worst-affected sectors such as hospitality and the arts.

The slump has left gross domestic product almost 20% smaller over the latest three months. Activity has picked up as lockdown restrictions eased in June and July, but the U.K., along with many other nations, remains a long way from approaching anything like a full recovery.

The Office for Budget Responsibility said the economy will shrink as much as 14.3% this year, based on its pessimistic scenario.

“An elevated deficit and debt burden explain why Sunak made a point last week of saying that he will set out a plan for putting the public finances on a sustainable footing in the fall. But, in reality, it’s more likely the focus of the budget will be on providing more support to the economy as the furlough program ends and the true hit to the jobs market becomes clear. Belt tightening will come, but only once the recovery is on a firmer footing.”

Even its upside projection sees a slump of more than 10%, which would be the worst in three centuries. The budget deficit will expand to between 13% and 21% of GDP and net debt will stay above 100% for the next few years.

The OBR said governments would find it hard to finance their deficits if debt was allowed to continue on its “explosive” path. Under the central scenario, a fiscal tightening equal to 2.9% of GDP, or over 60 billion pounds today, in tax rises or spending cuts would be needed “each and every decade” to bring back debt to a more sustainable 75% of GDP by 2070, it said.

Charlie Bean, a former Bank of England deputy governor who is now an OBR committee member, told Bloomberg TV that it was “perfectly sensible” for the government to begin unwinding its furlough program as the economy reopens because the plan was only intended as a “bridge” through lockdown.

“Inevitably there will be some rise in unemployment when that happens, even under a good scenario where there is a reasonably strong bounce back,” he said. “We still think that when once the furlough scheme ends, we will see some of those furloughed workers flowing into unemployment.”

George Buckley, an economist at Nomura International Plc, said he agrees with Sunak’s inclination not to keep the support on forever. But of all Tuesday’s alarming figures, the one that worried him the most was the forecast for unemployment.

The estimate was “quite shocking,” he said. “I think they’re going to have to be very careful about how quickly they scale back the policies they’ve put in place.”