The latest setbacks to the return of air travel are stoking concern that a cash crunch is about to bear down on the airline industry.

A second summer lost to the coronavirus crisis would likely trigger a spate of airline failures and bankruptcy filings, alongside a repeat of 2020’s bailouts, job cuts, and jetliner deferrals and cancellations, according consultants IBA Group.

In just the past week, the optimism that took the Bloomberg World Airlines Index to the highest since the start of the pandemic has evaporated.

TUI AG, the world’s biggest tour operator, scaled back its summer schedule to reflect a peak season that won’t start until July, at least two months later than normal. Ryanair Holdings Plc held a press briefing to reassure would-be holidaymakers they could change flights for free and exhorted them not to be “panicked” by negative headlines.

“The ground is shifting from one day to the next,” IBA’s Stuart Hatcher said in an interview. Governments are aware that pushing back the reopening of travel will mean more pain for the aviation industry but have been spooked by resurgent infection rates even as vaccine rollouts continue, he said. 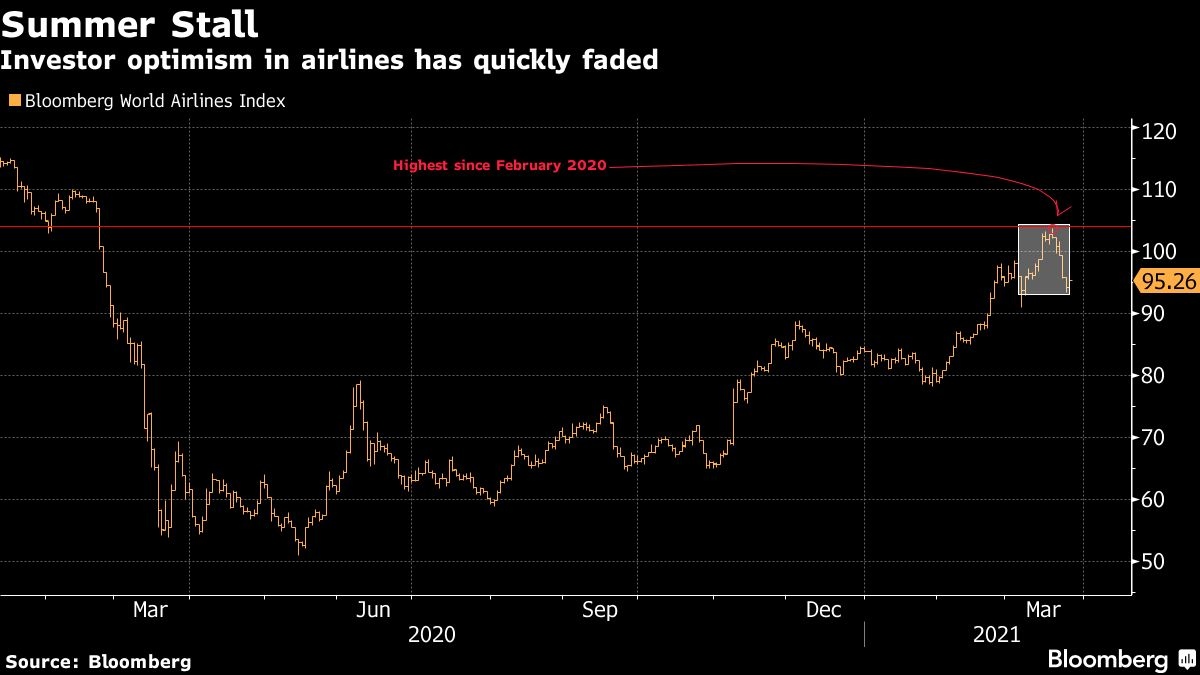 European carriers especially have felt the gloom that’s set in because of rising cases and fresh lockdowns. Leisure-focused companies such as TUI and Ryanair usually use the first three months of the year taking summer bookings, giving them a cash stockpile to work with as they gear up operations.

Any wiggle room is swiftly contracting. TUI, which caters to German and British travelers who flood to the Mediterranean during the warmer months, said Thursday it has enough liquidity to last “until the summer,” without being more specific. British Airways owner IAG SA secured a new loan using its coveted takeoff and landing slots at London Heathrow airport as collateral.

Travel needs to restart in earnest by July 1 or carriers risk missing out on the handful of months that will provide the bulk of annual earnings, Air France-KLM Chief Executive Officer Ben Smith said Thursday.

“What’s critical about July is that Q3, for the majority of European carriers, is the key quarter to make it through the year,” Smith said in a briefing held by the Airlines for Europe lobby. The group is pushing for the rapid adoption of so-called vaccine passports and an end to quarantines it says crush demand.

While 45 airlines failed in 2020, many more have been hanging on in hopes of an imminent revival of leisure markets, Hatcher said. That’s looking less likely as the year develops, with Airports Council International on Thursday forecasting global passenger traffic will remain almost 50 per cent below usual levels this year.

While most carriers could survive a delayed summer, the cost to bail them out would be considerable. Even before the latest setbacks, the International Air Transport Association said carriers would need as much as US$80 billion more in government money this year.

In Europe, Air France-KLM is seeking further aid on top of 10.4 billion euros (US$12 billion) in loans and guarantees granted last year. TUI, which has taken 4.8 billion euros in German government aid, gave no financial forecast at its annual meeting on Thursday, promising only that cash flow will trend toward breakeven as business normalizes.

The airport sector will also need state support, the ACI group said, warning that even large hubs are struggling. The industry is “in a precarious situation right now,” the trade association’s economist Patrick Lucas said.

There could also be an extension of US$50 billion of Cares Act loans and worker payments in the U.S. and a similar continuation of furloughs in Europe and elsewhere. Even then, airlines may need to deepen cost cuts.

Airlines and travel firms are now waiting for U.K. Prime Minister Boris Johnson to deliver his verdict on reopening travel from Britain in an update set for April 5. A targeted date of May 17 is expected to be pushed back.

“The market is there, the customers want to travel,” said Fritz Joussen, TUI’s CEO. “However, the conditions for tourism need to be created at the political level.”