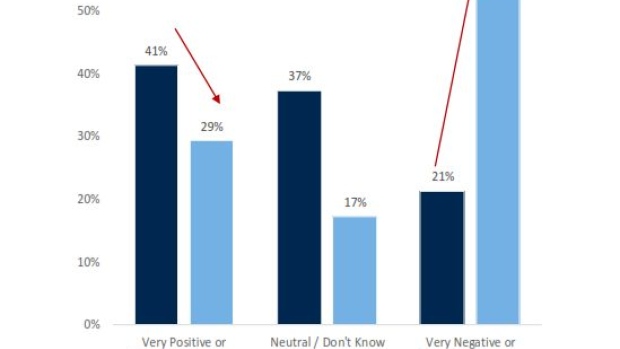 An RBC Capital Markets survey conducted at the end of March showed 53% of investors say the policy backdrop over the next four years is somewhat negative or very negative, compared with just 21% in December. Biden intends to pay for parts of the bill by raising taxes on companies and revamping the corporate tax code, moves that likely will dent profits.

“Taxes are top of mind for U.S. equity investors, with tax policy coming in at No. 2 on the list of things they are losing sleep over, behind monetary policy but ahead of inflation,” wrote RBC’s head of U.S. equity strategy Lori Calvasina in a note Tuesday. “The policy backdrop for stocks under Biden now skews towards the pessimists.”

Biden’s fiscal boost has helped propel the U.S. equity market’s rise to all-time highs, with the proposal to shore up crumbling U.S. infrastructure coming after a $1.9 trillion coronavirus bailout bill. But as more details come out on how he intends to fund the spending, stock investors are dialing back their optimism.

Along with boosting the corporate income tax rate to 28% from 21%, the White House plan also calls for a complete revamp of how U.S. companies pay taxes on foreign profits. Treasury Secretary Janet Yellen said Wednesday the changes, over a decade, would bring back about $2 trillion in corporate profits into the U.S. tax net, with about $700 billion in federal revenue streaming in from ending incentives to shift profits overseas.

Legislation has not yet been written and months of negotiations loom, but tax experts have suggested the proposals will likely hit technology and pharmaceutical companies particularly hard -- the two biggest sectors in the S&P 500 Index.

Goldman Sachs Group Inc. strategists calculated last month that higher corporate taxes could cut S&P 500 earnings growth by as much as 9% in 2022 if Biden’s 2020 plan were to be fully implemented.

“The market has to be convinced that the fiscally stimulated economy will generate enough growth to counter the raft of taxes that are required to pay the bill,” said Quincy Krosby, chief market strategist at Prudential Financial Inc., which has over $1.5 trillion under management. “There’s always a concern that both fiscal packages could be too much of a good thing.”

After an 82% rally in the U.S. benchmark from its pandemic lows, investors have begun to question whether the big gains may be over. BTIG LLC’s Julian Emanuel noted recently that years when corporate and individual tax rates rise are often followed by equity underperformance.

While JPMorgan Asset Management is bullish over the longer term, its global market strategist David Kelly sees a bumpy road ahead. He estimated tax increases could eat up roughly 5% of the $2.1 trillion in after-tax corporate profits his team has penciled in for next year.

Still, other investors are predicting that the boost to growth from the stimulus will be enough to offset any tax impact.

“On a static basis, the proposed tax increases could take S&P 500 profits down by an estimated 8% or 9%, and that is what markets are starting to worry about,” said Brad McMillan, chief investment officer for Commonwealth Financial Network, which manages about $230 billion. “On a dynamic basis, though, the extra spending that goes with them should push profits up.”