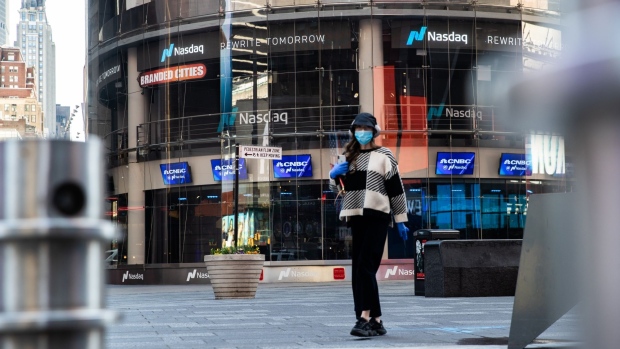 A pedestrian wearing a protective mask walks past the Nasdaq MarketSite in the Times Square neighborhood of New York. Photographer: Jeenah Moon/Bloomberg , Bloomberg

It was just a few months ago when reports of rising coronavirus cases routinely sent stocks into a tailspin. Not anymore.

Rather, it’s as if investors have become inured to daily COVID-19 count headlines. Take Monday, when the cumulative number of total confirmed cases in the U.S. neared three million, yet the S&P 500 rose for a fifth straight day, its longest winning streak of the year. Tuesday, the president of Brazil tested positive for the virus, and stocks barely budged.

As difficult as it may be to understand, especially with human lives behind each and every statistic and businesses still struggling, some Wall Street strategists say there are logical reasons for the disregard. Instead of rising case counts, traders moonlighting as epidemiologists are now focused on data including fatality rates and hospitalizations that could force governments to lock down anew or pressure the economic recovery.

“Case count isn’t necessarily a negative as long as those who are catching it aren’t susceptible to a really bad outcome,” said Bob Phillips, managing principal at Spectrum Management Group. “As long as the trend of deaths stays down, I think investors can live with the virus and with the expectation that we will get through it and we may have seen the worst of the damage.”

According to Bespoke Investment Group’s Paul Hickey, virus positivity rates may be skewing higher due to a lack of testing over the holiday weekend. Consider that reported coronavirus tests are down nine per cent on a week-over-week basis, the biggest drop since a 24 per cent decline that happened around Memorial Day. It’s likely the Fourth of July holiday is at least partially to blame for higher national positivity rates.

Independence Day is “driving tests down sharply, sending positive rates surging (to the highest rate nationally since the end of April) but having little impact on hospitalizations,” Hickey wrote in a note. On Monday, hospitalization rates were lower on a weekly basis though still above 1,000. Hickey expects test counts and new cases to bounce back this week, sending the positivity rate lower. He added that deaths remain “quite low for now.”

Ryan Detrick, senior market strategist for LPL Financial, has been watching the growing gap between new cases and the fatality rate. In a tweet Monday, he noted that the seven-day average of new COVID-19 cases in the U.S. hit another new high, while an equivalent measure of deaths from the virus hit a new low.

“Aware cases are supposed to lead deaths, but it hasn’t happened yet and this divergence is probably a big reason stocks are near new highs,” Detrick said.

To Fundstrat Global Advisors’s Tom Lee, there are a few events that could have a significant impact on the markets. One is the development of a cure or vaccine. The other is the possibility that recently hard-hit states like Florida, California, Arizona and Texas (a group he’s dubbed “F-CAT”) could see cases diminish, marking the apex of the current U.S. wave.

Lee sees certain counties in each state acting as leading indicators and estimates there’s an 80 per cent chance Texas is already past its peak. Meanwhile, Florida has implemented a double-counting methodology, meaning that a new case is tallied each time a patient tests positive -- even if that patient took multiple tests, he says.

Lee points out daily deaths remain in a downtrend. Though cases have been surging across the U.S. for several weeks, subsequent spikes in nationwide hospitalizations and deaths have not followed. “This is becoming a pattern, where the absence of ‘bad’ or even catastrophic news is resulting in a general upwards drift in markets,” Lee wrote in a note to clients.