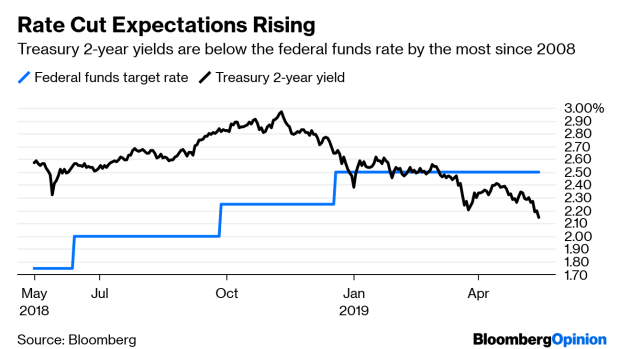 CHICAGO, IL - SEPTEMBER 26: Traders monitor offers in the S&P options pit at the Cboe Global Markets exchange shortly after the Federal Reserve announced it was raising interest rates on September 26, 2018 in Chicago, Illinois. The Fed agreed to increase the federal funds rate a quarter percentage point, to a range of 2% to 2.25%. (Photo by Scott Olson/Getty Images) , Photographer: Scott Olson/Getty Images North America

(Bloomberg Opinion) -- President Donald Trump’s trade war with China is heating up, prompting traders to start betting on as many as three Federal Reserve interest rate cuts totaling 75 basis points this year. That’s the kind of prediction that makes me think it is time for everyone to take a deep breath. The Fed is simply a long way from that kind of move. Neither the magnitude of recent market moves nor the data flow justify that kind of reduction in rates.

Consider first the central bank’s current position. As New York Federal Reserve President John Williams describes the situation, the U.S. economy is in a “very good place.” Both inflation and unemployment remain low. Job growth continues at a pace the Fed believes will eventually put further downward pressure on unemployment. Concerns about a deteriorating economic outlook have lessened substantially since late last year. These trends leave policy makers a bit coy about any potential deviations from a steady rate path for this year.

That said, renewed trade tensions should tilt the Fed in a dovish direction. And although there is speculation that the inflationary impact of tariffs raises the odds of a Fed rate hike, I would be cautious with this assessment. Tariffs should have only a transitory impact on inflation. If the Fed truly has a symmetric inflation target, they will be as unimpressed with any resulting inflation overshoots as they are with the current undershoot. Consequently, the Fed will weigh any economic weakness associated with the trade wars more heavily than any upward pressure on inflation.

Still, consider the magnitude of the economic weakness necessary to prompt the Fed to cut rates by 75 basis points. Given where the Fed is now, we would need to see patterns of economic activity quickly evolve in such a way that policy makers became fearful that a recession is imminent. But trade shocks are likely insufficient alone to generate that kind of economic disruption.

A recent report from the Center for Economic Policy Research estimates that the 2018 trade wars reduced real U.S. income by $1.4 billion a month at the end of 2018. While this sounds like a sizable number, real disposable income was $14.4 trillion in 2018. Realistically, these trade disruptions get lost in the aggregate numbers and are not sufficient to justify a 25-basis-point cut, let alone a 75-basis-point reduction.

Shifting the direction of the U.S. economy meaningfully requires much larger trade wars. The case for a 75-basis-point cut thus seems more likely based on the possibility that trade wars trigger a financial crisis. Here again, though, we need to consider the degree of financial disruption needed to push the Fed in this direction.

In late 1998, the Fed eventually slashed rates 75 basis points in the wake of the Asian and Russian financial crises as the collapse of Long-Term Capital Management threatened a Wall Street with a systemic financial crisis. At this point, the current turmoil on Wall Street just doesn’t compare. Equity prices recently hit record highs, and a small pull back isn’t going to faze the Fed. Indeed, the Fed wouldn’t halt its rate hiking campaign even as markets tumbled at the end of last year. To prompt 75 basis points of rate cuts this year, we would need to see the turmoil expand to the point that credit markets lock up. We are not there yet.

The short story is that yes, the trade wars will favor a dovish Fed reaction. That’s consistent with my belief that the odds favor a rate reduction over a hike this year. Still, market participants look to be getting ahead of themselves. Anything over a 25 basis-point cut requires a much larger economic or financial disruption than seems likely at this time.

To contact the author of this story: Tim Duy at duy@uoregon.edu