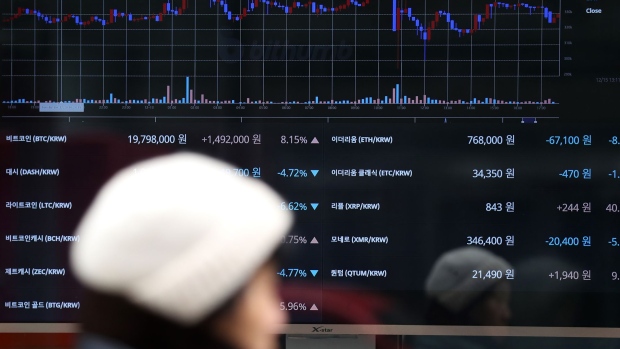 A pedestrian walks past a monitor showing the prices of virtual currencies at the Bithumb exchange office in Seoul, South Korea. , Bloomberg

Three men were charged by U.S. prosecutors with helping run a US$722 million cryptocurrency fraud that amounted to a “high-tech Ponzi scheme.”

From 2014 until this month, the men operated BitClub Network, which solicited money from investors in exchange for shares in purported cryptocurrency mining pools and rewarded them for recruiting new investors, according to prosecutors.

Goettsche referred to potential BitClub Network investors as “dumb” and “sheep,” saying he was “building this whole model on the backs of idiots,” according to the statement. In September 2017, Goettsche sent an email to a co-conspirator in which he suggested BitClub Network would allow them to “retire RAF!!! (rich as f*ck),” prosecutors said.

Goettsche and Weeks are charged with conspiracy to commit wire fraud, while all three men are facing charges of conspiracy to sell unregistered securities.

Lawyers representing the three named defendants couldn’t immediately be located. They’re expected to appear in court on Tuesday, Carpenito said in the statement.

Bitcoin mining is a process through which “miners” can earn newly issued bitcoin by using special software to solve complex algorithms. BitClub Network claimed to pool investor money to buy mining hardware and computer capacity and then distribute the profits, according to the government. The group instead reported fake profits and defrauded its investors, prosecutors said.

Prosecutors have also brought fraud cases involving bitcoin rival OneCoin. A lawyer was convicted three weeks ago in New York of laundering US$400 million from the fraudulent OneCoin cryptocurrency, which prosecutors claim operated as a Ponzi scheme, in which investors are promised unrealistic returns and early investors are paid with money from later investors.

Mark Scott, 51, was found guilty Nov. 21 of money-laundering conspiracy and bank-fraud conspiracy after jurors deliberated for 3 1/2 hours. Prosecutors claimed Scott set up a phony investment fund that he used to process money from Ruja Ignatova, the Bulgarian woman who cofounded OneCoin Ltd. Ignatova disappeared in 2017 as OneCoin came under suspicion from law enforcement.