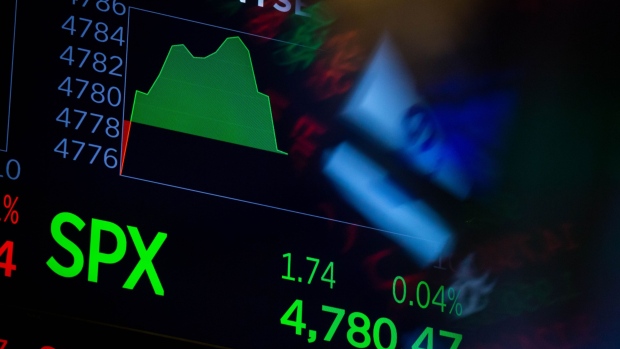 To all the record highs, the months without a correction and every other death-defying feat the stock market has pulled off, add another superlative. The S&P 500 Index has now doubled since New Year’s 2018, capping a stretch of sustained strength with few precedents.

Using monthly closes, you have to go back decades to find another period when the index’s three-year total return exceeded 100 per cent. Two decades, to be exact, to the bursting of the internet bubble. And while nothing in that comparison is basis for panic in any rigorous statistical sense, it at least shows the dauntlessness of the current rally and the challenge investors face in deciding if it’s sustainable.

To wonder is normal. Doubts creep in when superlatives pile up. A third straight year of double-digit returns for the S&P 500. Seventy record highs in 2021 alone. The best December since 2010, pushing the index to 26 times earnings. In the past five sessions, the gauge added 0.9 per cent, another up week in a year when positive closes made up 63 per cent of the total.

“December’s gain could be January’s pain,” said Mike Bailey, director of research at FBB Capital Partners. “If investors are topping off their winners in December, that might dilute the January effect,” he said. Pressures early on in 2022 may include more hawkish commentary from the Federal Reserve, inflation-constricted fourth-quarter earnings reports, and valuations that are near five-year peaks. 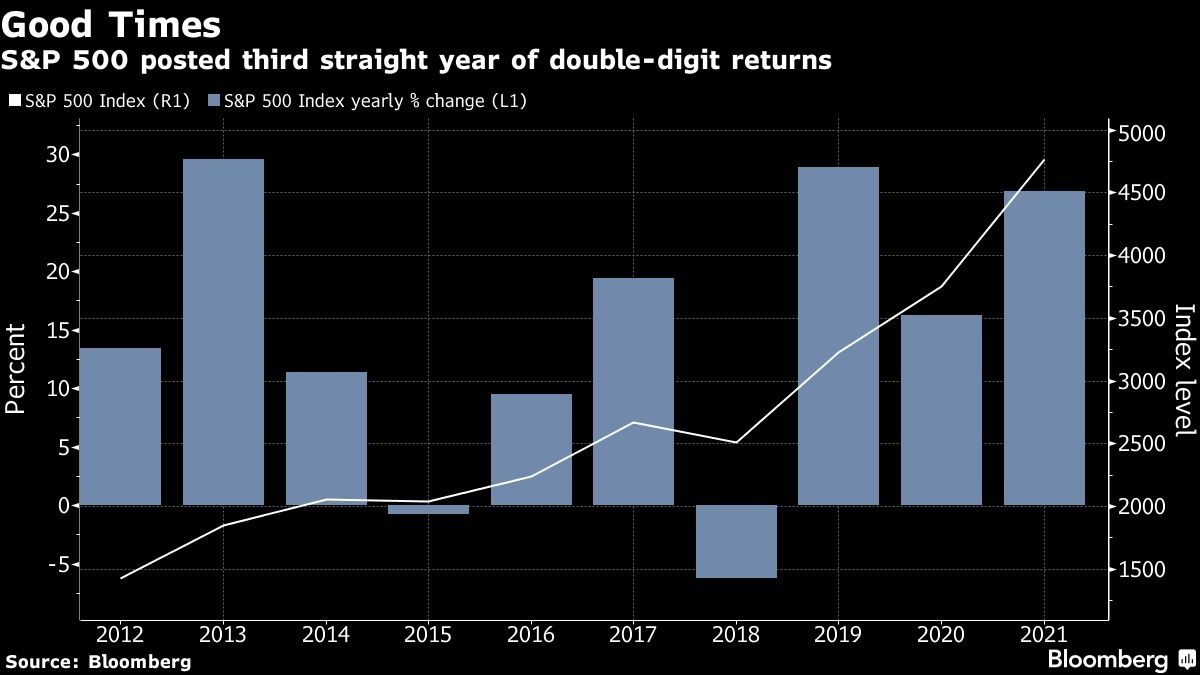 History shows that may be the case. Following an annual return of greater than 20 per cent, the S&P 500 tends to start out the year tepidly. That’s the case for data going back to 1980, with Januaries that follow blockbuster years coming in flat on average. And that performance is worse than the average January return of 1.2 per cent over the last eight decades, according to Jessica Rabe, co-founder of DataTrek Research.

“There can be sizable drawdowns in the first month of a new year after an outsized gain,” she wrote in a note. “Investors shouldn’t expect this year’s positive momentum to carry through next month.”

With this week’s rally, the S&P 500’s three-year total return crossed 100 per cent for the first time since March 2000, according to Bespoke Investment Group. 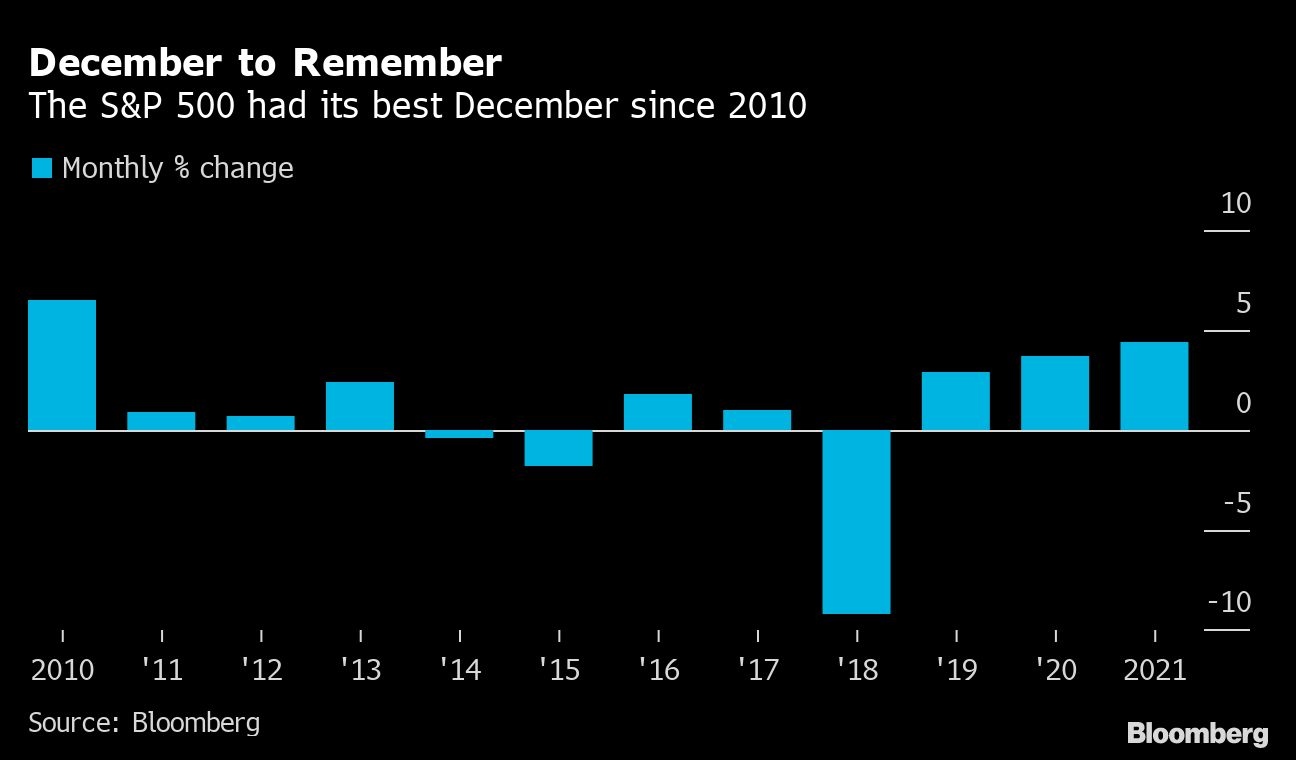 By almost any measure, 2021 was a giant year for stocks. All S&P 500 Index sectors posted double-digit gains for the first time, with eight of them rising 20 per cent or more, according to data compiled by Bloomberg since the GICS classification system was implemented in 1999. The best-performing group, energy, rose 48 per cent in 2021, after being the worst performer in 2020.

For all its twists, though, it was an appreciably less polarized year for equities than the previous one. Amid the first COVID-19 wave, seven stocks in the S&P 500 tripled in 2020, compared with zero this year, while 15 fell by more than 40 per cent, a fate that all avoided this time. Tesla Inc.’s 743 per cent gain ranked first in the benchmark in 2020, while Devon Energy Corp.’s comparatively modest 179 per cent surge was the top this year.

“A lot of people think we might give some of this back as we enter the new year. That could happen,” Jim Paulsen, chief investment strategist at Leuthold Group, said on Bloomberg TV and Radio. He expects 2022 to be volatile overall, and says returns won’t be as robust as they were this year.

Chief among investor concerns in the new year is the Fed, which recently announced it would speed up its withdrawal of economic stimulus. Steve Sosnick, chief strategist at Interactive Brokers, looked at the central bank’s holdings of securities, which have gone up by roughly US$130 billion this month through Christmas. That’s not exactly a taper, he says, so when their purchase pace does start to slow more significantly, markets could react negatively.

“As the taper kicks in, we are more likely to get some corrections since the inflows of money into the system will be reduced,” Sosnick said. “That’s why I’m expecting increased volatility.”

“It’s probably going to be a little bit tempered because people are not thinking, ‘Hey, I’m piling in, back up the truck, let’s buy everything under the sun’ sort of thing,” he said by phone. “So it’s that starting point from an investor psyche also, I think, that puts up a little bit of a ceiling to having a 25 per cent to 30 per cent run in stocks.”

But as anyone paying attention to markets knows, heeding bear cases, no matter how sensible-sounding, has been a costly mistake for a long time. Tightening lockdowns, rising bond yields, fattening valuations -- each has sounded worrisome, none has stuck. Saying markets may be volatile in January due to how fast they’ve recently risen is another view that could easily crash and burn -- though its simplicity has an appeal to certain Wall Street pros.

“Earnings are going to keep growing and the bond yield is not going to keep flying up, and that means you’re sort of forced into buying the S&P 500,” said Michael Purves, chief executive and founder of Tallbacken Capital Advisors. “And that’s what happened this year in 2021 -- every dip was bought.”

There are plenty of tail winds for next year. Janasiewicz, for instance, says a largely positive earnings season can help keep stocks aloft when earnings reports start to roll in -- and analysts have already been ramping up forecasts for the upcoming season.

Leuthold’s Paulsen says the S&P 500 could cross above 5,000 in the first half of the year “on excitement that finally we may be moving COVID from a pandemic to an epidemic,” he said, adding “and on the realization that inflation is moderating.”