TSX has one of the cheapest valuations right now and it’s a great way to stay exposed: Sionna's co-CIO

It’s been an epic rally for Canadian equities in 2021 with the S&P/TSX Composite Index reaching record highs, so what does 2022 hold?

2021 was a year filled with earnings surprises to the upside, and although this may not be as sustainable heading in 2022, BMO Capital Markets Chief Investment Strategist Brian Belski says these broad-based earnings gains are usually followed by a surge in dividend growth.

“This, according to our work, is likely to generate an impressive, if not ambitious dividend growth cycle that could see overall dividend growth surge well above historical averages over the next 12-24 months,” he wrote in his 2022 market outlook report published in November.

“As such, we believe investors should begin positioning in areas that are likely to increase dividends and share buybacks, which is likely to be a key theme as we head into 2022 and beyond.” 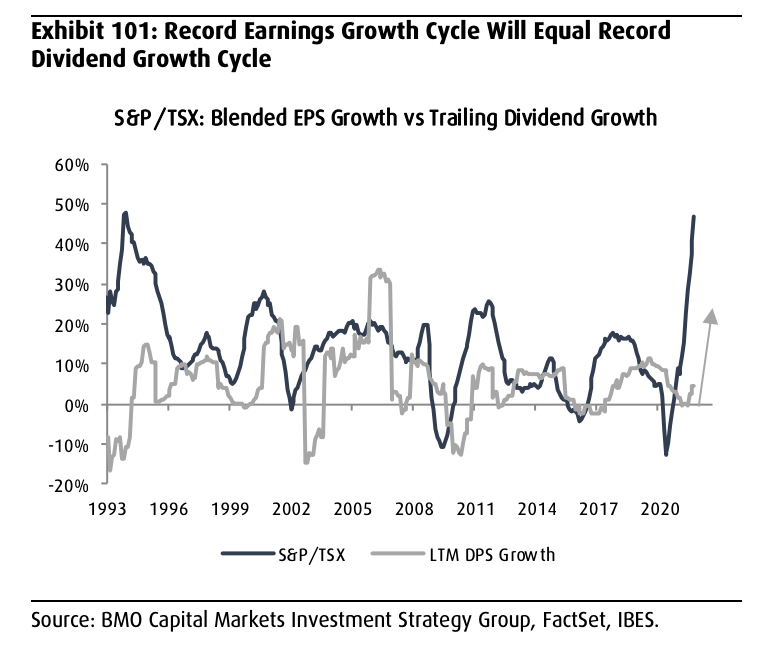 CIBC World Markets Equity Strategist Ian de Verteuil recently told clients he expects $120 billion will be returned to investors in TSX-listed companies in 2022, split between $30 billion in buybacks and $90 billion in dividends, with energy and financials leading the charge. Altogether, de Verteuil says that would provide investors with an annual payout yield of roughly 3.5 per cent. 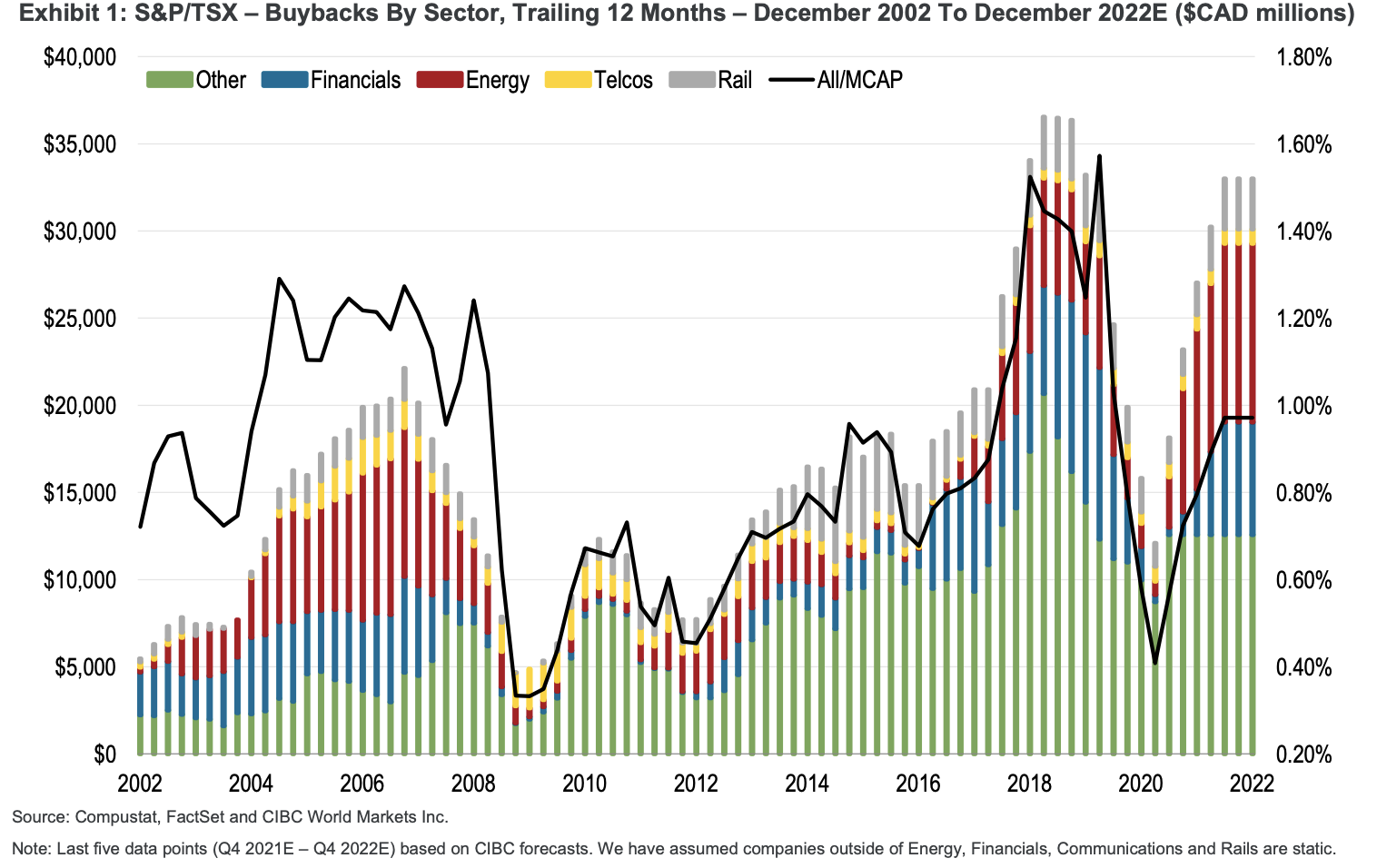 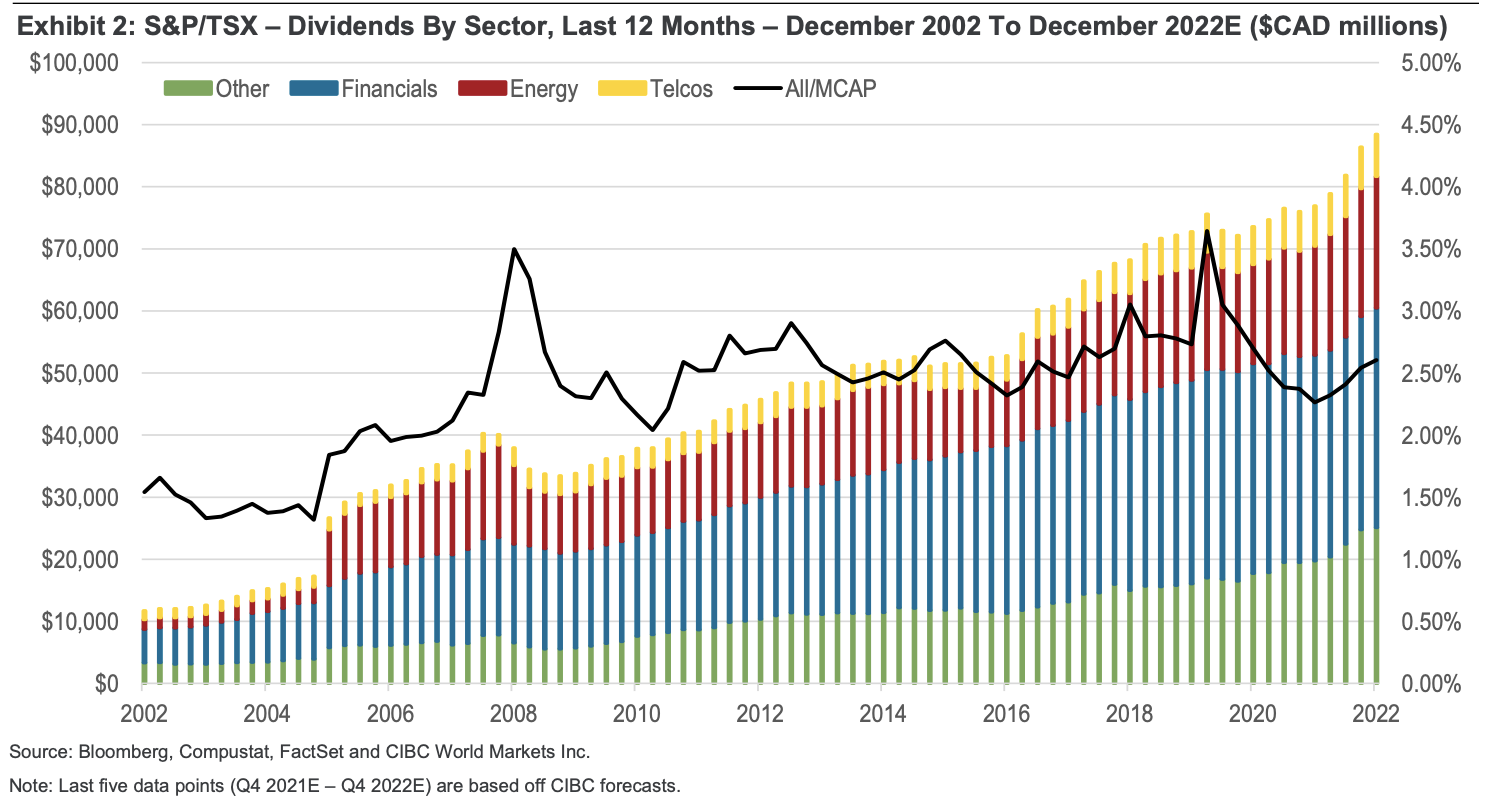 De Verteuil says the nearly 3.5 per cent level reflects a dividend yield of about 2.4 per cent and a buyback yield of more than one per cent.

That may seem modest to some, but given what the 10-year Government of Canada bond is offering, equities still look to be the most attractive asset class.

"In an environment where 10-year Government of Canada bonds yield less than 170 basis points, investors are likely to continue to favour equities,” de Verteuil told CIBC clients in an equity research report published in November.

A second reason why Canadian equities still look attractive heading into 2022 is valuation.

Despite the record earnings rebound in 2021, the S&P/TSX Composite Index is still trading at a historical discount to the S&P 500, thus creating an attractive value opportunity in Canada. 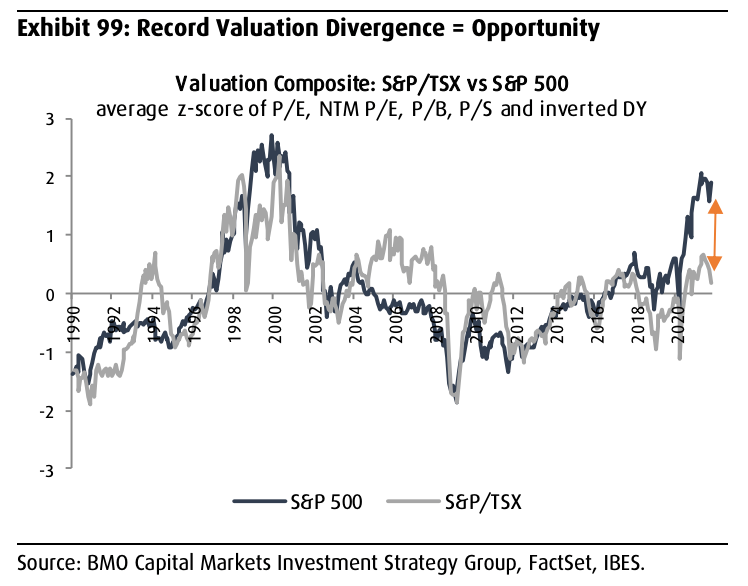 As an investment strategist, Belski says he believes Canadian oil and gas continues to be viewed as a “deep value sector” and the Canadian materials sector is still trading at a discount given its heavy exposure to gold.

“Energy remains a deep value sector in Canada especially relative to global energy peers," Belski wrote in a 2022 market outlook report published in November. "The Canadian materials sector is now in discount territory given its heavy weight in gold, which has seen a sharp compression in valuations despite gold prices being relatively stable and historically a strong inflation hedge."

Lastly, given the TSX’s heavy exposure to commodities, Canadian equities have long been viewed as a strong hedge against inflation.

According to National Bank of Canada Chief Economist and Strategist Stéfane Marion, when inflation exceeds four per cent for an extended period of time, the TSX tends to outperform the S&P 500.

“The TSX provides a much better hedge against inflation than the S&P 500; an average annualized return of +2.3 per cent versus -5.9 per cent for the S&P 500,” Marion noted in a report to clients in October.

The Bank of Canada’s latest policy decision outlines an expectation for the consumer price index to remain elevated in the first half of 2022 before easing back toward the bank’s two per cent target in the second half of the year.

However, ongoing global supply constraints continue to cloud the outlook. As of November, Canada’s annual inflation rate was 4.7 per cent.