Boeing is widely expected to emerge victorious next week when the U.S. Department of Commerce makes its preliminary ruling on the company’s trade complaint against Montreal-based Bombardier.

But the reasons why the U.S. airplane maker started the dispute in the first place may not be as advertised.

Three charts demonstrate why Boeing is forging ahead with this trade spat, despite the threat of losing a multi-billion dollar fighter jet contract with the Canadian government and raising the ire of at least two world leaders. 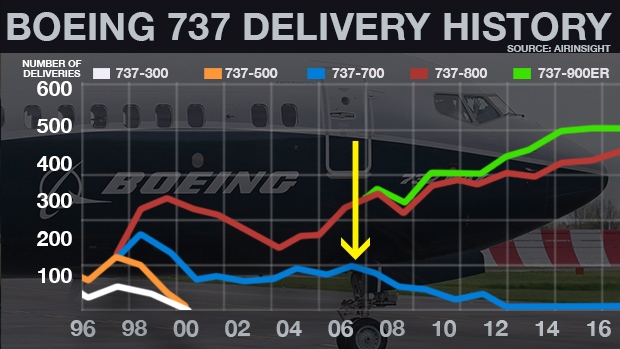 Boeing’s 737-700, which seats up to 149 passengers, is the closest competitor to Bombardier’s CSeries jets.

The aircraft was among the airplane maker’s top sellers in the late 1990s, but deliveries started tailing off in 2006.

According to research by U.S.-based consultancy AirInsight, the most recent delivery of a 737-700 was in October 2016.

“Boeing wasn’t ignoring this market,” wrote AirInsight president Ernie Arvai in a recent report. “It was busy moving customers upmarket to the 737-800 and more recently to the MAX8.”

Boeing alleges it suffered harm when Delta Air Lines in 2016 agreed to purchase up to 125 CS100s. The airplane maker argues “illegal” Canadian subsidies allowed Bombardier to sell its jets at “absurdly low prices,” distorting the market.

But Boeing began its slow exit from the under-150-seat segment in 2006.

The real threat, according to analysts, is if Bombardier decides to stretch its CSeries into a model that competes with the Boeing’s larger aircraft.

Bombardier has a successful track record of stretching aircraft into larger models. And analysts say Boeing is fearful its Montreal rival may eventually enter its airspace.

“We believe Boeing is not only concerned about the Delta order but also about… potentially [penetrating] the larger narrow-body segment (more than 150 seats), which is Boeing’s key focus area,” Macquarie analyst Konark Gupta wrote in a note to clients.

Bombardier is, after all, renowned for masterfully stretching aircraft into larger, successful models. And Boeing is fearful its rival may eventually enter its airspace. 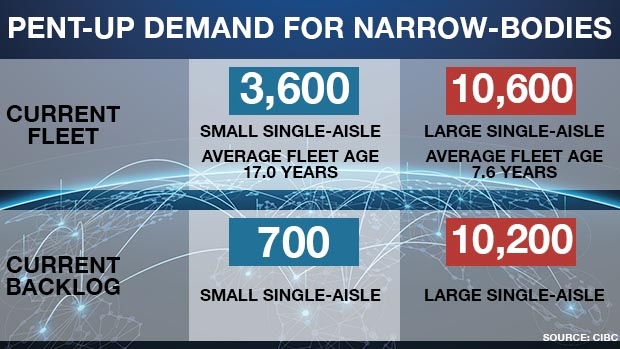 The jets are also under-ordered, with a current backlog totaling just 700, according to research by CIBC World Markets.

By comparison, larger single-aisle jets are a youthful 7.6 years old, on average, and their order backlog is high.

But it also means the company may increase its presence in the U.S., Boeing’s home turf and the CSeries’ largest addressable market.

He believes other U.S. airlines will take a closer look at the aircraft once the planes are in Delta’s hands. “Boeing is doing this to eliminate a potential competitor.”

Analysts expect Boeing’s dispute with Bombardier to last well into 2018, putting a chill on CSeries sales in the U.S. and beyond.

“I think if customers know the largest market is shut down to Bombardier [airlines outside the U.S.] have leverage in the negotiations,” BMO analyst Fadi Chamoun wrote in an email. 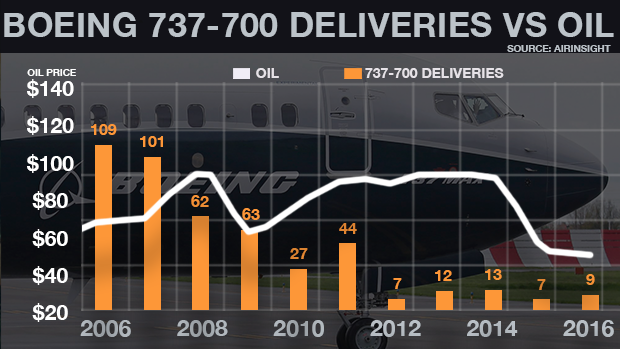 In the world of aerospace, Bombardier achieved the near-impossible: Its CSeries beat the brochure.

“Fuel efficiency is up to 3 per cent better than the brochure value, which is almost unheard of,” wrote CIBC analyst Kevin Chiang in a recent report.

As oil prices rose in 2009, Boeing encouraged airlines to take advantage of its larger planes’ economies of scale. Correspondingly, sales of its smaller 737-700 fell off.

“Boeing’s strategy was correct, and customers understood this,” Ervai wrote.

But with Bombardier’s CS100 and CS300 now on the market, airlines have more options to save on fuel. And that undercuts Boeing’s pitch - that bigger is better.

“The engine alone is a reason to buy that plane,” noted Jenkins. “Because it’s 20 per cent more fuel efficient than anything out there.”