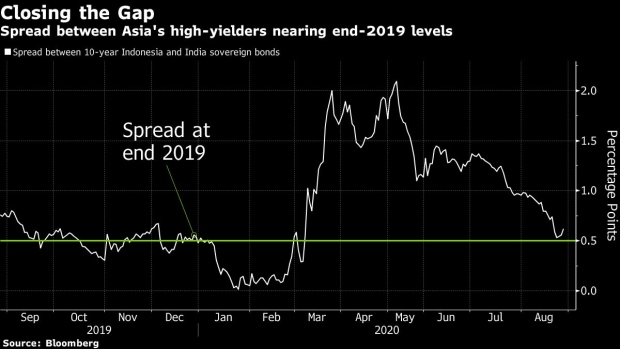 People wearing protective masks shop for vegetables at Kebayoran Lama Market in Jakarta, Indonesia, on Friday, July 24, 2020. With the worst coronavirus outbreak in Southeast Asia taking a toll on Indonesia’s economy and jobs, a majority of the nation’s citizens oppose the continuation of strict social distancing orders to contain the deadly disease, according to a survey. Photographer: Dimas Ardian/Bloomberg , Bloomberg

(Bloomberg) -- Indonesian bonds look set to win the beauty contest between Asia’s high-yield twins. The extra yield on the nation’s benchmark debt over India’s is closing in on the least this year, and there may be more narrowing to come.

Bank Indonesia remains the more interventionist and supportive of the two central banks due to its debt monetization program. Domestic inflation also remains muted in the Southeast Asian country, while prices in India are rising faster than the target. Recent declines in rupiah’s hedging costs also give a tailwind for Indonesian bonds, and may attract further inflows from global funds.

Here are three key reasons why Indonesian bonds may be set to extend their recent outperformance over India’s this year:

Indonesia’s bond yields have fallen since May due to the central bank’s explicit intervention and commitment to purchase bonds. The monetary authority has been buying debt at primary auctions since April, and in July said it would purchase close to 400 trillion rupiah ($27 billion) of securities directly from the government. This has assured investors that the bond market won’t be overwhelmed by further issuance as the government seeks to finance the widest budget deficit in two decades.

In comparison, the Reserve Bank of India has so far refused to explicitly commit to debt monetization, preferring a stealth approach of buying bonds in the secondary market instead. The central bank has attempted to suppress long-tenor yields via a Federal Reserve-style “Operation Twist” -- swapping long-tenor bonds for an equivalent amount of short-maturity ones -- with the most recent round concluding on Thursday. Traders have been hankering for more decisive intervention, viewing the central bank’s efforts to cap further increases in long-maturity yields as insufficient.

A stark difference emerges on the inflation front. Indonesia’s consumer price index fell to a two-decade low of 1.54% in July, providing policy space for the central bank to ease further if the need arises. In India, above-target consumer price increase have hindered the RBI’s maneuverability, with the central bank recently indicating that policy rates may stay on hold until inflation slows to within the 2% to 6% target range.

Accelerating inflation has also depleted India’s real yield premium -- nominal yields less annual CPI. A recent study by Bloomberg found the nation’s bonds would be the most vulnerable among emerging markets to an inflation shock. By comparison, Indonesia’s debt was found to be one of the best positioned due to its comfortable real-yield premium.

Indonesia’s bond yields have traditionally been highly susceptible to global flows due to the relatively high foreign ownership of its government debt, currently at around 28% of the total amount outstanding. In India, the figure is just around 2%.

Attractive rupiah hedging costs may help lure back money from international investors, who have turned net sellers in August for the first time in five months. The implied yield on one-month non-deliverable forwards has fallen below that of 10-year bonds, suggesting investors who hedge on a rolling basis will be able to get positive carry with reduced currency volatility.

Some analysts see hedging costs as another reason to be positive about Indonesia’s debt.

“The recent plunge in rupiah hedging costs will be crucial in attracting foreign flows back into Indonesian bonds,” said Duncan Tan, a strategist at DBS Group Holdings Ltd. in Singapore. “The ability to cheaply hedge out direct rupiah exposure will entice global investors who want exposure to Indonesia’s high and falling yields, but at the same time apprehensive about the rupiah’s recent depreciation.”

Note: Marcus Wong is an EM macro strategist who writes for Bloomberg. The observations he makes are his own and not intended as investment advice