Three years after Canada legalized cannabis, the industry appears ready for a reset.

When midnight struck on Oct. 17, 2018, Canada became the first developed nation to allow the sale of cannabis for recreational purposes, and since then the industry has had its share of ups and downs. While billions of dollars worth of legal pot has been sold across thousands of licensed stores, helping to stamp out roughly half of the illicit market, it's also seen many cannabis companies cumulatively post billions of dollars in losses as market dynamics warped lofty expectations made in the early days of legalization.

But change may be afoot as the Canadian government undertakes a lengthy 18-month-long review of the legislation that legalized cannabis, which many in the industry hope will address several shortcomings and stabilize some of the more tenuous parts of the sector, like lowering fees or amending packaging and potency requirements.

"What's at stake is that three years from now, we don't all look back with a tragic collective sigh about the unrealized opportunity," said George Smitherman, president of the Cannabis Council of Canada, the industry's main lobby group. "The risk is that we'll have run out of energy for the kind of continuous quality improvement that a brand new out-of-the-box law like this needs."

The legislation states that the Minister of Health, the person tasked with regulating cannabis in Canada, will review how legalization has impacted public health, notably among youth as well as the impact it has had on Indigenous persons and communities and home cultivation. A spokesperson for Health Minister Patty Hajdu told BNN Bloomberg that further detail on the review will come soon.

"As with any new legislation, especially for something as comprehensive as the Cannabis Act, there will always be room for improvement and adjustments to ensure it is meeting its objectives: keeping cannabis out of the hands of youth while keeping profits out of the hands of criminals and organized crime," said Andrew MacKendrick, spokesperson for the health minister.

At 776 producers, the number of companies licensed to sell or process cannabis in Canada has reached a staggeringly high figure that many industry observers and analysts alike believe contributed to the oversupply of legal pot in the market.

As a result, it led to billions of dollars in writedowns and millions of grams of unsold marijuana being disposed of. While that figure may also demonstrate a successful transition for those moving from the illicit to the legal market, some people see the current state of the industry as unsustainable and leading to heavy consolidation. 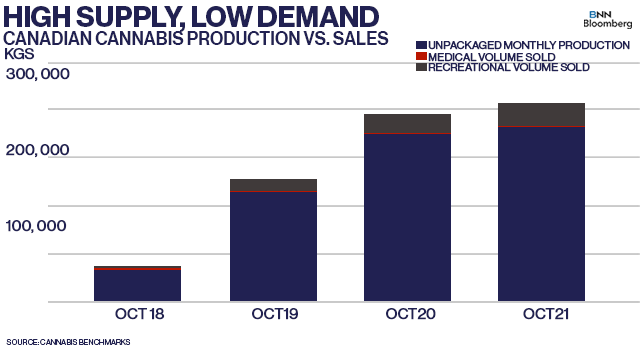 "It's highly inefficient, but they have the right to exist and I think good business practices will prevail," said Mandesh Dosanjh, chief executive officer at Pure Sunfarms, the wholly-owned cannabis subsidiary of Village Farms International Inc. "We're seeing some very interesting things from (licensed producers), dropping pricing to the point where they're losing money, quarter after quarter, negative margins, and just not making any money to their bottom line. It's a bit of a bloodbath out there for some licensed producers."

Peter Miller has managed to escape that bloodbath. The chairman of Agripharm Corp. sold his pot production business earlier this week to TREC Brands, a company that offers several brands to the recreational market, for just shy of $16 million.

Miller, who was one of the first licensed producers to sell to medical patients nearly a decade ago, still sees the current market dynamic as unsustainable for the near term.

"I guarantee you that a large part of the market currently is priced below people's cost to produce," he said. "That just means we're going to have more pain, more groups starting to kind of retrench and leave the market, and more large producer facilities shutting down."

While tax revenue may not have been atop the list of priorities for the Liberal government that legalized cannabis in 2018, it certainly didn't hurt. Roughly $1.068 billion in excise taxes have been collected by provincial and federal authorities since pot became legal, according to Statistics Canada.

That figure doesn't include goods-and-services taxes collected at a point-of-sale. However, taxes have emerged as a hot-button issue for many cannabis companies frustrated with paying what they feel is too much for some products, namely edibles and concentrates.

Smitherman said that the upcoming review should address some of the onerous taxation policies put in place that have made it challenging for small and big producers alike to make a decent return on their investment.

Norton Singhavon, chief executive officer of B.C.-based Avant Brands Inc., thinks producers -- in addition to selling to provincial wholesalers -- should be allowed to ship directly to consumers, similar to how wine is sold in Canada. And would be happy to pay a bit extra in taxes to do so.

He suggests that excise tax regulations should be amended to be a percentage based on the selling price of the product in the province that they sell into. "How can I bolster my business to connect with consumers when I don't even know who my consumers are because my main customer is a wholesaler," he said.

From a trickle to a flood. That's what the state of the cannabis industry's retail market feels like three years after stores could legally sell to consumers.

The 2,652 legal pot stores open across the country today have helped erode the significant presence that illicit operators have had, which now have mostly retreated to online sales. 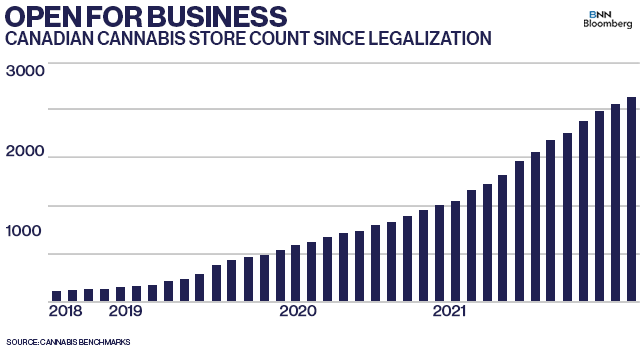 More than $6 billion of cannabis products have been sold in the past three years, according to Statistics Canada, although recent monthly sales figures indicate that growth may be slowing down.

The market itself is expected to grow from $4 billion in annual sales this year to as high as $9 billion over the next decade, according to New Frontier Data. But opening a cannabis store isn't a guaranteed windfall anymore.

Some cities across the country, namely Toronto, are now burdened by a concentration of pot stores that have seen some owners opt to throw in the towel and sell the business entirely.

As well, retailers have had a challenging time during the COVID-19 pandemic, forced to open and close their doors to obey lockdown orders while transitioning to curbside pick-up and offer delivery services, said Neighbourhood Joint co-owner Andrew Rhodes.

"The amount of development in the cannabis industry has been insane," he said. "During COVID, when everything else was shutting down, everything that was being built was a cannabis store."

While the federal review isn't likely to affect retailers, who are regulated by the provinces they operate in, Rhodes still thinks the government should offer some changes to potency and packaging requirements to lure more consumers.

"Specifically on beverages, I think that was one of the biggest goofs that the government has made so far," he noted. "The limit on drink sales are based on how much liquid volume is in the drink, not by the actual THC that's in the drink."

Indeed, one of the more eye-opening factoids about the legal cannabis industry is the $17 billion of economic output it now contributes to the Canadian economy, according to StatsCan.

Today, the illicit market is seen to account for 39 per cent of the market, down from about 91 per cent when legalization kicked off three years ago, according to Cannabis Benchmarks.

While legalization has been a notable success in stamping out illicit players, there is still a perception that many key policymakers in Ottawa are embarrassed to highlight the progress the legal market has made, according to Omar Khan, senior vice president for corporate and public affairs at High Tide Inc.

"We in the cannabis sector are tired of governments kind of treating our industry as the embarrassing child that's put in the corner and nobody wants to talk about," he said in an interview.

Khan said that Innovation, Science and Economic Development Canada, the ministry responsible for overseeing the country's economic development, needs to establish an industry panel that includes members of the cannabis industry and policymakers that could better address the challenges and pitfalls of the sector.

"It doesn't mean that government has to solve every problem," Khan said. "But governments should be aware of what the problems are and to the extent that government can help alleviate them, then there should be a forum to have those discussions. Right now, that just doesn't exist."