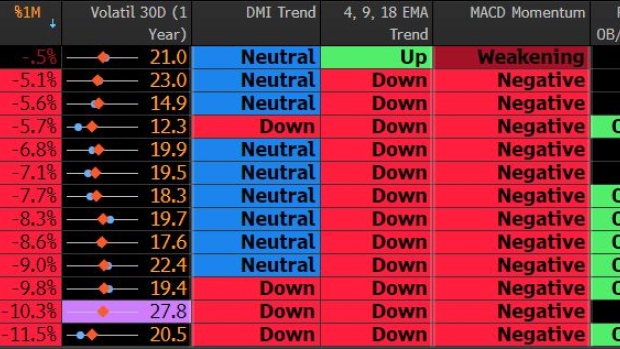 A trader works on the floor of the New York Stock Exchange (NYSE) in New York, US, on Friday, Aug. 26, 2022. Stocks sank as Jerome Powell gave a short and clear message that rates will stay high for some time, pushing back against the idea of a Federal Reserve pivot that could complicate its war against inflation. Photographer: Michael Nagle/Bloomberg , Bloomberg

(Bloomberg) -- After hefty losses, stock market volatility is still on the rise and traders are rushing to bet on further equity downside, yet investors’ throw-in-the-towel moment may not have arrived.

US stocks were largely unchanged on Monday after slumping more than 9% in the last two weeks. After such periods of hectic selling, a short-term bounce is common, meaning investor capitulation -- the dramatic selloff which often helps markets to bottom out -- may be a little way off.

Indeed, Morgan Stanley’s Michael Wilson sees an “eventual low” for the benchmark S&P 500 Index coming later this year or early next at the 3,000 to 3,400 point-level. That implies 13% downside at the midpoint.

“A look at overall flows suggests that capitulation hasn’t happened yet,” Bank of America strategists told clients on Friday. “We think there is more pain for markets and don’t see a big low until yields peak.” they added, referring to expectations that US interest rates and borrowing costs will rise further.

BofA strategists said though their closely watched sentiment gauge, the Bull & Bear Indicator, signaled extreme bearishness -- levels that often portend a rebound -- the overall investment flows are yet to reverse.

There are other signs too of a near-term bounce.

First, the relative strength index (RSI) is a 0-100 momentum gauge measuring if markets are oversold -- or overbought, as the case may be. The S&P 500 Index’s RSI currently shows about a quarter of stocks are at 30 or below, a level seen as a sign of excessive selling. That level has marked a short-term bottom in the past. During the 2020 pandemic-time sell off, 72% of stocks hit oversold levels.

Then take a look at stock market volatility. The VIX index, the so-called fear gauge of Wall Street, has risen steadily in recent weeks but remains almost 20% below this year’s highs. Meanwhile, US trading in “put” options -- derivatives allowing holders to sell an asset when a certain price is breached -- is at the highest since the pandemic sell-off. That signals investors’ keenness to hedge further downside but also that maximum fear may be close.

Finally, trend and momentum indicators are in the red across all major stock benchmarks. Technical indicators such as RSI and Bollinger bands are supporting the notion of a possible bounce.

For Morgan Stanley strategists including Jonathan Garner, Fed Chair Jerome Powell’s end-August hawkish message from the Jackson Hole conference and September data showing a US CPI uptick accelerate a move down. In a note dated Sept. 20, they wrote these events raised “the likelihood that a classic capitulation trough could be forming, most likely in October.”