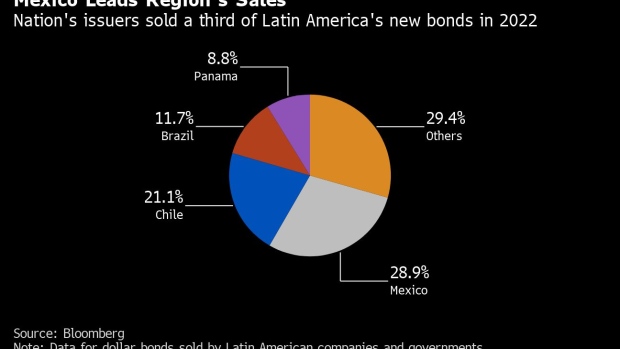 A customer pays for fish in a food market in Riohacha, Colombia, on Saturday, Aug. 13, 2022. Soaring prices of food and fuel across Latin America are hitting the poor the hardest, creating a political tinderbox that's a warning to the world. , Bloomberg

(Bloomberg) -- A chill that pushed Latin American borrowers out of international bond markets this year is setting in as the US reckons with the prospect of higher-for-longer interest rates.

Companies and governments in the region have sold about $44 billion of dollar bonds this year as the Federal Reserve sent borrowing costs soaring, the smallest amount for the same period in any year since the global financial crisis in 2008, according to data compiled by Bloomberg.

It’s a dilemma that analysts warn will postpone the typical deluge of early-year bond sales until at least the second half of 2023. While investment-grade borrowers can likely carry on without the help of foreign bondholders, there are fewer options for junk-rated companies or governments at greater risk of slipping into distress or default.

“The potential for rates to stay at current levels or go higher is probably deterring issuers from coming to the market,” said Teresa Alves, an analyst at Goldman Sachs Group Inc. “That is likely to remain an issue until we reach peak hawkishness.”

Latin America, which is dominated by high-yield borrowers, saw bond issuance tumble about 63% through Nov. 28 from the same period a year ago, according to data compiled by Bloomberg. By comparison, hard-currency debt sales are down roughly 41% in Eastern Europe and about 48% in emerging Asia over the same timespan.

It’s a grim position for Latin American officials who watched Wall Street’s appetite for risky bonds evaporate this year amid fear of accelerating inflation and a potential recession.

Governments that turn to higher taxes risk adding to pressure on citizens already feeling the sting of inflation. At the same time, multilateral and country-to-country lending often comes with concession, while the local debt markets are harder to tap after recent domestic central-bank hikes.

“If the world continues like this for another 18 months of high stress and high yields, we may see bankruptcies among companies that aren’t able to roll over their debt,” said Phil Torres, global co-head of emerging-market debt at Aegon Asset Management in Chicago.

That’s left Wall Street with a weaker appetite for risky bonds. Investors this year have been the least interested in Latin America’s junk-rated borrowers, effectively locking out new issuance from nations such as El Salvador.

Things are still tricky for high-yield issuers that may still able to access the market at higher rates. Colombia, which was slashed to junk by two credit scorers last year, on Monday sold new 10-year bonds, even though it will cost the country more than twice the interest of its previous similar-length bond offering. Colombia also offered to buy back debt due in 2023 and 2024.

Investment-grade issuers have had better luck, with Mexico’s total of $8 billion in bonds making it the region’s largest debt seller of 2022, and Chile close behind with $6 billion in debt, according to Bloomberg-compiled data. Panama, meantime, sold another $1.5 billion in debt at a coupon of 6.4% this month and announced a buyback of over $800 million in bonds.

Paraguay, meanwhile, is likely to postpone the sale of as much as $548 million in bonds it had anticipated for early 2023 until it has more visibility on the direction of rates.

“The hope is that we’ll start to see more issuance activity next year, first from sovereigns and quasi-sovereigns, and then corporates,” Silva said. “Once the market tests a few names, investors may get more confident about testing BB+ and BB credits.”

Such a broad return to debt markets likely won’t happen until the second half of 2023, according to Citigroup Inc. debt strategist Eric Ollom. A heavier back-end of the year would mark a break from tradition and likely be dominated by investment-grade issuance across emerging markets, according to Citi.