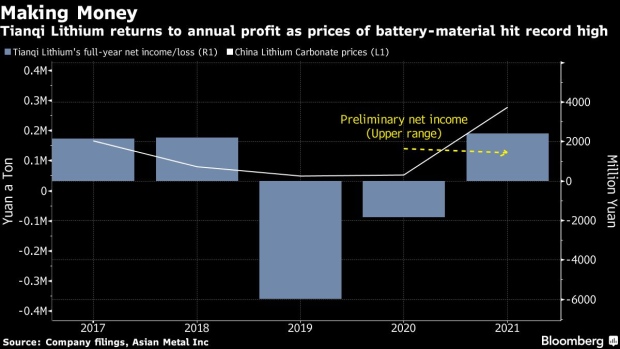 (Bloomberg) -- Tianqi Lithium Corp., the Chinese battery-material supplier that’s planning to list in Hong Kong, will return to profitability for the first time in three years due to surging electric-vehicle demand.

It cited capacity expansions by battery manufacturers, higher lithium product prices and sales volumes, and improved investment income from miner Sociedad Quimica y Minera de Chile as reasons for the result. The official figures are likely to be released in late April.

Chinese lithium carbonate prices have been on a tear, jumping by almost a third this year after surging more than 400% in 2021. The global push toward an electrified transport fleet has fired up consumption of the battery material and supplies are struggling to keep pace.

The resurgence in demand helped Tianqi make a profit for three quarters in a row last year, after suffering seven consecutive quarterly losses. It made a 1.8 billion yuan loss in 2020 amid debt repayment pressures that forced it to sell part of its stake in the Greenbushes mine -- the world’s largest lithium project -- in Western Australia.

First-quarter earnings should continue to be supported by higher lithium carbonate prices, Daiwa Capital Markets analysts Dennis Ip and Leo Ho said in a note. However, Tianqi will likely see a sharp increase in the cost of spodumene -- a lithium-bearing raw mineral -- under an annual price adjustment mechanism, they said.

Tianqi, whose shares already trade in Shenzhen, is reviving a plan to list in Hong Kong. The lithium supplier is working with China International Capital Corp., Morgan Stanley and CMB International on a share offering that could take place as soon as mid-2022 and may raise $1 billion to $2 billion, people familiar with the matter said earlier.

Shares of the company rose as much as 6.8% on Thursday in Shenzhen.