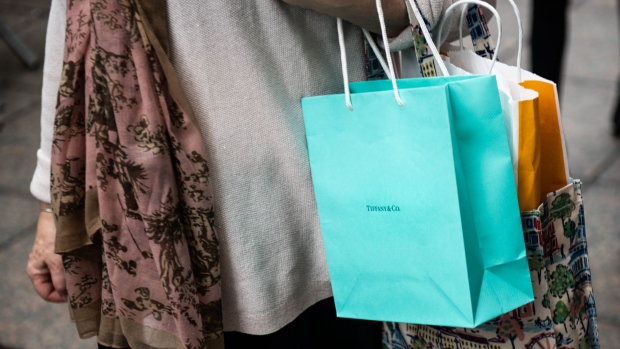 Tiffany & Co. shares jumped as the jewelry company nears an agreement on a lower price to revive its deal with French luxury conglomerate LVMH.

The French company has proposed a lower price of about US$131.50 a share, down from the original US$135, according to people familiar with the matter. Tiffany’s board will meet Wednesday to discuss the new terms, they said.

The two sides are still finalizing the details of a compromise and the price could still change, the people said. The talks could also fall apart, they said.

The new terms would save LVMH roughly US$425 million from the original agreement, which totaled about US$16 billion.

Bloomberg reported Tuesday that Tiffany is seeking around US$132 a share as a compromise price, citing people familiar with the matter. It would also likely want a guarantee that LVMH wouldn’t back out of any revised deal, after the Louis Vuitton owner said in September it couldn’t complete the acquisition because of a French government request.

Tiffany shares erased losses on the news, rising 0.8 per cent to US$129.91 at 12:22 p.m. in New York. Representatives for Tiffany and LVMH declined to comment.

A compromise would end a yearlong saga involving a bitter war of words, French government intervention and lawsuits in the U.S. By striking a new deal, the companies could avoid a courtroom battle that was set for January in Delaware.

Adding Tiffany would give LVMH Chairman Bernard Arnault a major boost in the global jewelry market, letting the billionaire challenge Cartier owner Richemont for supremacy as the luxury industry begins to recover from a turbulent 2020. At LVMH, Tiffany would join a portfolio of high-end brands that include Dior, Givenchy and Bulgari.

The Wall Street Journal reported earlier that the companies are nearing a deal.