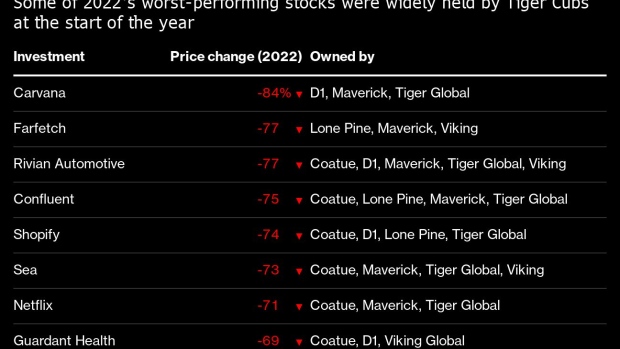 Now those shares are in free-fall, along with the hedge funds that piled into them. Clients are angry that these well-known traders, who take pride in making money during good times and bad, failed to foresee this year’s collapse and profit from it. Coleman’s Tiger Global Management lost 44% through April, incinerating $16 billion of investor capital. Dan Sundheim’s D1 Capital Partners -- whose firm is included in the group because it was spun out from a Tiger Cub -- lost 19% in his most popular portfolio.

Rubberneckers seeking clues about how the losses unfolded may get some answers by Monday, the deadline for asset managers to disclose the US shares they owned at the end of March. One looming question: Did any of the six biggest Tiger Cubs -- the hedge funds whose founders cut their teeth at Tiger Management under legendary trader Julian Robertson -- bail out of their tech holdings during the first quarter? If so, that would help explain the avalanche of selling that sent shares tumbling by as much as 84% this year.

These managers, which also include Andreas Halvorsen’s Viking Global Investors, Steve Mandel’s Lone Pine Capital, Lee Ainslie’s Maverick Capital and Philippe Laffont’s Coatue Management, held many of this year’s worst performers in their portfolios at the end of the fourth quarter, earlier filings show. Prominent among them were companies that thrived when consumers were stuck at home during the darkest days of the pandemic.

At least three Tiger Cubs had used-car dealer Carvana in their portfolios, accounting for 11% of the outstanding shares. Farfetch Ltd., an online apparel retailer, was owned by three of the firms that collectively held more than 9% of the stock.

Electric-vehicle startup Rivian Automative Inc. was also a popular bet, with five of the six hedge funds owning a combined 6.2% of the stock, according to the quarterly 13F filings, which don’t show short positions, stakes in closely held companies or shares traded outside the US.

Some stocks widely held by the Tiger Cubs — such as Amazon.com Inc. and Microsoft Corp. — were popular among hedge funds in general. But in others, Tiger Cubs made up an especially large share of hedge funds’ overall exposure, including more than 50% of Rivian, Farfetch and Doordash Inc.

The Tiger Cubs’ recent losses are especially stunning because they’ve been among the most successful equity hedge funds in the industry, amassing tens of billions of dollars and posting double-digit returns. In 2020, Coatue and Tiger Global gained 62% and 47%, respectively.

Of the 42 stocks owned by at least half of the Tiger Cubs at the end of December, all but two are down for the year, and almost 90% of of them underperformed the 27% loss for the Nasdaq 100 this year.

Lone Pine had the most overlap with its peers. The firm owned 80% of the 42 aforementioned stocks.

Even so, Lone Pine’s hedge fund lost 22% in the first quarter, about 12 percentage points less than Tiger Global. That adds to intrigue over how the firms each managed the market rout.

Coleman’s firm likely held on to many of the positions -- at least through the first quarter -- given its outsize loss this year. In an investor letter last month, Tiger Global wrote that it was “reassessing and refining our models.”

Viking and Coatue posted declines of 9% and 15%, respectively, in the same span.

Here’s a list of US stocks owned by at least three Tiger Cubs at year-end: