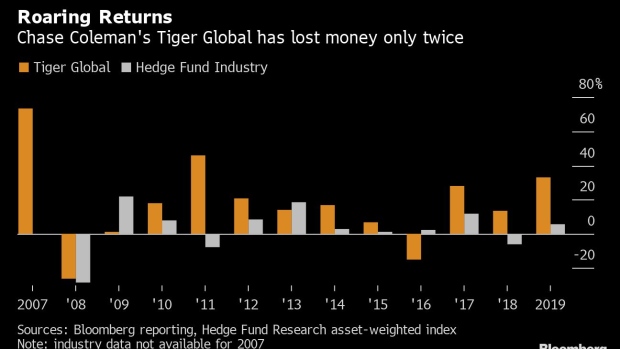 The latest is Neeraj Chandra, who left Coleman’s Tiger Global Management in 2017 and is launching his own investment firm with as much as $500 million, according to people familiar with the matter.

Coleman is one of at least 10 money managers who went on to run billions of dollars after cutting their teeth at Robertson’s Tiger Management, and at least eight managers have emerged from Coleman’s Tiger Global.

What unites former Tiger employees -- and their spinoffs -- is a name and a network, a powerful starting point giving the historically great performances of some of the group.

Coleman, in particular, has been producing double-digit performances, including a 33% return in 2019 that trounced most rivals and beat the soaring stock market.

Now, he’s spawned his own hedge-fund offspring. Another Tiger Global almunus, Lee Fixel, who last year started venture capital firm Addition with his own cash, is considering opening to outside money, according to a person with knowledge of the matter.

“When people spin out from Tiger Global, investors know they have been well-trained, that they have demonstrated success and that they often have backers that follow them to their new shop,” said Adam Taback, chief investment officer for private wealth management at Wells Fargo & Co.

Representatives for all of the firms declined to comment for this story.

Other disciples of Robertson’s Tiger, which was founded in 1980 and is considered one of the greats of the hedge-fund world, include Andreas Halvorsen and Philippe Laffont -- both of whom also have their own cubs.

Robertson’s proteges tend to follow a similar playbook, learned under his tutelage: Go deep into the fundamentals of a company and its management. If it’s best in class, buy it and if it’s worst, short it.

Coleman’s Tiger Global veers more to venture capital investing, which accounts for about half its $36 billion in assets, while his hedge fund runs about $10 billion and a long-only fund manages the rest.

Here’s a look at some of the Tiger Global cubs:

Not everyone has sought outside money. Former public equities chief Feroz Dewan left Tiger Global after 12 years in 2015 and started Arena Holdings. Despite speculation that he could amass sizable assets, he’s used his own money to buy stakes in public and private companies.

To contact the reporter on this story: Hema Parmar in New York at hparmar6@bloomberg.net

To contact the editors responsible for this story: Sam Mamudi at smamudi@bloomberg.net, David Gillen