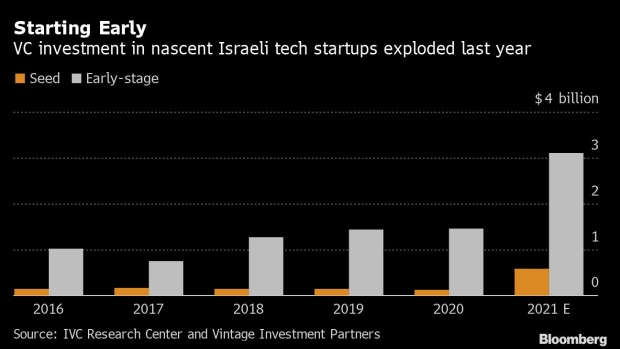 (Bloomberg) -- The big money has arrived for what could be the next generation of Israel’s vaunted technology sector.

International investors helped set off a bonanza last year, when Israeli startups raised about $26 billion -- more than double the previous high in 2020 and nearly a quarter as much as the funding that poured into Europe as a whole.

Upending the pecking order in local venture capital, U.S. funds made 266 early-stage investments, an increase of almost a fifth from the previous year, according to data from Start-Up Nation Central, a non-profit organization that tracks the industry in Israel.

The exuberance comes with more risk. Tiger Global Management and Insight Partners, which have already bankrolled Israel’s largest privately-held firms, are increasingly betting on younger and less proven companies as a way to corner the market of upcoming winners and potentially reap greater returns. SoftBank Group Corp. and Blackstone Inc. are meanwhile opening local branches to better sniff out opportunities.

Foreign investors tend to win deals by cutting larger checks than local competition, until now the primary source of funding for Israeli tech companies that are often still figuring out what to sell.

“We want to work with good founders and other venture capital,” said Stephen Ward, managing director at New York-based Insight, which has committed more than $30 billion globally.

Insight had 70% more Israeli deals in 2021 than the next most active investor. In a single month last year, three of its Israeli-founded portfolio companies -- Monday.com, SentinelOne and WalkMe -- raised more than $2 billion combined when they went public in the U.S.

SentinelOne, which uses artificial intelligence to protect companies against security threats, also won the backing of investors including Tiger Global and Sequoia Capital before an initial public offering that valued it at nearly $9 billion.

The deluge of foreign investment has been a boon for Israel’s tech companies. New York-based Tiger Global, founded by billionaire Chase Coleman, had at least 16 investments in Israeli technology firms in what’s been a record year of fundraising for the industry.

But the eagerness to spend doesn’t necessarily sit well with some veteran Israeli investors, concerned the newcomers will exacerbate or even create new market distortions.

In the view of Vintage, which has $2.3 billion under management, the investment surge has been comparable to other hot tech markets. “A lot” of startups are being funded at valuations “fifty, one hundred, even two hundred times annual recurring revenue -- something very few companies get in public markets,” said Horesh.

And it’s those out-sized checks that could crush competition from scrappier companies and entrepreneurs, posing a risk to Israel’s ability to keep churning out hundreds of new tech firms every year, according to Shmuel Chafets, founder and chairman of Target Global, which oversees 3 billion euros ($3.4 billion) in assets.

“Before, everyone was investing about the same,” he said. “As these big platforms move down the investment chain, there’s a real concern that the very professional, very competitive VC industry that’s been created here will shrink because its harder to compete with the global giants.”

“And when returns start to dwindle or if there are better opportunities in public markets, then the industry will suffer dramatically,” Chafets said.

Other investors worry that entrepreneurs will go for the frothier checks at the expense of the more hands-on approach of Israeli early-stage investors, who have a deeper local network and more experience with the challenges facing startups.

Global investors are meanwhile putting down deeper roots in Israel. Insight recently hired Liad Agmon, who sold his company Dynamic Yield for about $300 million to McDonald’s Corp. to help steer its local branch.

That serves to complement Insight’s staff of more than 100 people who’re helping its companies scale their businesses, a number likely to grow as it continues to ramp up investments, Ward said.

Michael Eisenberg, who co-founded Aleph, a Tel Aviv-based venture capital fund with $850 million under management, welcomes the challenge to prove that “money is not just money.”

It’s the more focused attention local investors give to early-stage companies, rather than the big checks from funds “deploying capital so rapidly,” that’s harder to put a price on, he said.

“If Insight loses $100 million, it doesn’t matter,” said Eisenberg of Aleph, which has backed firms like WeWork Inc. and Lemonade Inc. “If Aleph loses $10 million, it pains me personally.”