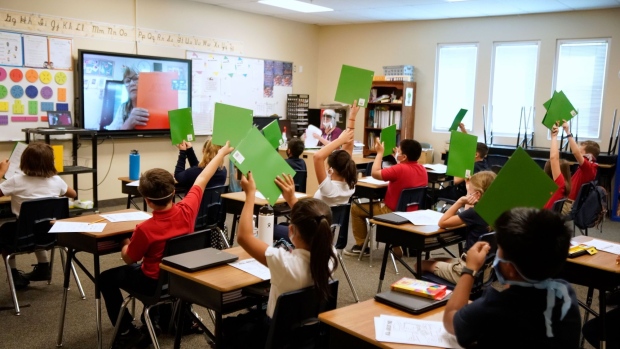 Students wearing protective masks raise their hands in a classroom as a teacher gives a lesson remotely at a public charter school in Provo, Utah, U.S., on Thursday, Aug. 20, 2020. Students and staff in Utah who don’t wear a mask in K-12 schools in accordance with the Governor Gary Herbert’s mandate can be charged with a misdemeanor, reported the Salt Lake Tribune. George Frey/Bloomberg Photographer: George Frey/Bloomberg , Bloomberg

(Bloomberg) -- Tiger Global Management is putting $200 million into GoGuardian, a company that sell software to K-12 schools, in a further sign of private equity’s bet that the boom in classroom technology will outlive the pandemic.

The investment gives GoGuardian, which is backed by Sumeru Equity Partners LP, a valuation of more than $1 billion. Formed in 2014, the Los Angeles-based startup began by offering a Chrome tool that let schools track and filter student internet browsing. Like other online education companies, GoGuardian saw an explosion of interest during the pandemic as schools struggled to make virtual learning work.

Sales grew over 150% since last summer, according to the company. Chief Executive Officer Advait Shinde said it has been “cash flow positive since day one,” but declined to share total revenue or profitability.

The company said 22 million students from kindergarten to 12th grade and 10,000 U.S. schools use its software. Those clients include 23 of the 25 largest U.S. districts, up from just 11 before the pandemic. This year, GoGuardian signed statewide deals with Delaware and West Virginia, and plans more.

Shinde argued that the splurge in edtech from remote schooling won’t end as districts reopen in person. “Teachers who were previously on the fence are now going to continue using these tools,” he said in an interview. “It’s a permanent acceleration toward the use of technology.”

Tiger Global has invested heavily in online education in China, although the sector has taken a recent hit there due to regulation. GoGuardian operates only in the U.S., but Shinde said it plans to expand globally after the investment, which makes Tiger Global a minority shareholder.

In addition to web filtering, GoGuardian offers products for classroom management and monitoring, including a feature it advertises as identifying students at risk for suicide or violence. Privacy advocates have criticized this sort of technology as invasive. Shinde said GoGuardian complies with state and federal privacy laws and that schools own all student data collected by the company.

In March, private equity firm Golden Gate Capital purchased Securly, a GoGuardian rival, for an undisclosed amount. PowerSchool Holdings Inc., another edtech company backed by private equity, as seen its shares climb 14% since its initial public offering in late July and is now worth about $4 billion.

Over the last year, GoGuardian’s workforce has grown around 60%, it has acquired two smaller edtech companies and added Julie Larson-Green, a Microsoft Corp. veteran, to its board of directors. But Shinde said a public listing is “not something we’re actively planning or discussing.”