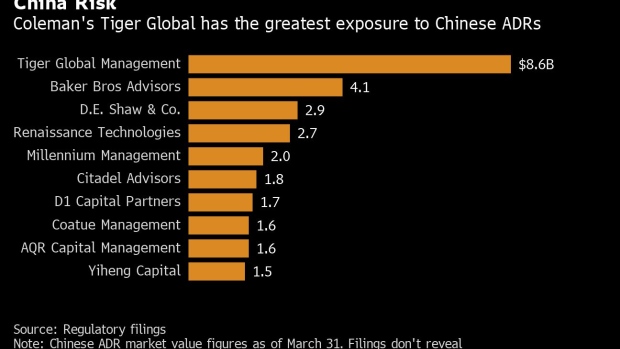 (Bloomberg) -- After making a fortune in China for two decades, Tiger Global Management is taking a hit from the nation’s unexpectedly widespread regulatory crackdown.

Chase Coleman’s $65 billion firm, at least by one measure, leads U.S. hedge fund peers with exposure to the country and has seen some of its biggest stakes plunge during this week’s selloff in Chinese stocks.

Tiger Global held $8.6 billion in American depositary receipts of Chinese companies as of March 31, topping the list of 340 hedge funds that publicly disclose such holdings. Those ADRs were valued at about $6.4 billion Wednesday, filings show. The disclosures exclude short positions and non-U.S. traded securities.

JD.com -- the firm’s biggest equity holding in the first quarter -- Alibaba Group Holding Ltd. and Pinduoduo Inc. have all slid this year, with the latter losing almost half its value. Other struggling bets include Didi Global Inc. It has tumbled about 36% since its initial public offering last month.

Tiger Global hasn’t disclosed its July performance, which may be offset, at least in part, by hedges and investments that jumped in the month.

Investors in some of China’s most vibrant sectors -- from technology to education -- have been hit as Beijing attempts to rein in private enterprises it blames for exacerbating inequality, increasing financial risk and challenging the government’s authority. Investors are monitoring how far Xi Jinping’s Communist Party is willing to go as it tightens its grip on the economy.

Tiger Global remains bullish on China long term, according to a person with knowledge of the matter. That optimism is based on the view that previous periods of intervention subsided over time and that China doesn’t want to discourage entrepreneurship, the person said.

Its exposure to China isn’t limited to public holdings. The firm, which invests in the region through hedge funds and private equity funds, has active investments in about 36 closely held companies based in China or Hong Kong, according to PitchBook data.

Tiger Global started investing in battered Chinese internet stocks in 2002, which led the New York-based firm to uncover “a small ecosystem of Chinese e-commerce companies, roughly akin to the Amazons and Expedias of China,” according to an investor letter seen by Bloomberg.

Soon after, the firm opened its first private investment vehicle to gain exposure to Chinese technology companies that were too illiquid for Tiger Global’s flagship long-short hedge fund. Its bet: The nation’s internet penetration could triple over five years.

“We went out to investors with signed term sheets in hand and a summary of our view that backing companies at the nexus of the emerging market consumer and the growth of the internet could yield high returns,” the Tiger investment team said in the Feb. 26 letter, marking the firm’s 20th anniversary.

Tiger Global’s flagship fund has compounded at a 21% return over 20 years, while its private investment funds have generated a net internal rate of return of 26%, according to the letter. The firm’s private bets have reaped billions in dollars in gains from wagers on Peloton Interactive Inc.’s IPO and from backing Flipkart and JD.com.

Several so-called Tiger Cubs, alumni of Julian Robertson who started their own shops, are also big investors in China.

Philippe Laffont’s Coatue Management, another Didi backer, had three venture Kona funds with almost $2 billion of exposure to China as of March 2020, documents obtained by Bloomberg show. Among its holdings is Ant Group Co., whose $35 billion dual listing in Shanghai and Hong Kong was scuttled last year by Beijing.

Meanwhile, the $30 billion Lone Pine Capital has been cutting its China exposure, according to people familiar with the firm’s investments. Those stakes are now at the lowest level ever for the firm, yet Lone Pine remains bullish on Meituan, the world’s biggest food-delivery company, as well as Chinese health-care and biotech stocks.

Representatives for Coatue and Lone Pine declined to comment.