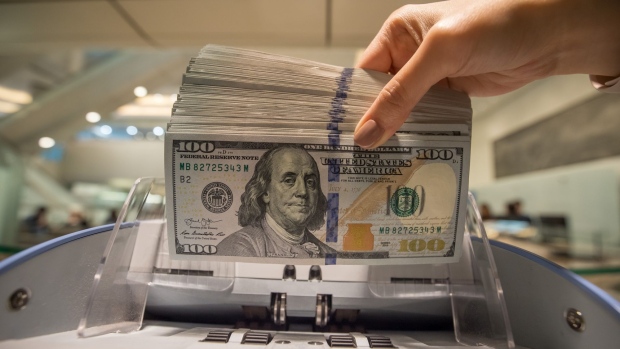 An employee uses a machine to count U.S. one-hundred dollar banknotes at the Hang Seng Bank Ltd. headquarters in Hong Kong, China, on Tuesday, April 16, 2019. China’s holdings of Treasury securities rose for a third month as the Asian nation took on more U.S. government debt amid the trade war between the world’s two biggest economies. , Bloomberg

(Bloomberg) -- Tiger Global Management is seeking $6 billion for its next venture fund, even after writing down the value of its private portfolio and as institutional investors pull back from the asset class.

That’s less than the $8 billion some clients had initially been told the firm would likely target, as markets have changed and as Tiger Global focuses more on early-stage venture bets, according to people familiar with the matter, who asked not to be identified discussing private communications. The figure is also less than half the size of the preceding vintage.

The new vehicle, Private Investment Partners Fund 16, will invest in startups, “largely in enterprise themes and in India” and “in a lower-valuation environment,” New York-based Tiger Global said in a letter to investors Thursday.

PIP 16 will focus on internet-enabled enterprise software, fintech and consumer companies because they’re “underpenetrated categories” with rapid and long-term growth potential, according to the letter. The fund will also make “opportunistic follow-on investments” in Tiger Global’s existing roster of global portfolio companies, including through secondary share purchases.

Employees will kick in at least $500 million, with most coming from founder Chase Coleman and firm partner Scott Shleifer, some of the people said.

The firm told investors earlier this week that partner John Curtius, who focused on software and business-to-business investments, is leaving. He was responsible for more than 100 of the firm’s private wagers. It notified clients of his departure before beginning fundraising for PIP 16 to avoid surprises after they had committed capital, people said.

This year has been the most tumultuous since Tiger Global’s founding in 2001, with the firm’s total assets tumbling to about $63 billion from $100 billion. Its hedge fund lost almost half of its value through August as stocks swooned and startup valuations declined, while its long-only fund plunged about 62% through July.

Tiger Global’s private portfolio fell in the third quarter and it marked down valuations every month this year. Seven investments have each lost at least $100 million, one of the people said.

“Public market valuations declined quickly and meaningfully in our focus areas, subsequently depressing valuations and deal activity in private markets as the cost of capital increased,” according to the letter.

Fundraising has become increasingly harder for firms this year, as institutional investors including pensions, endowments and family offices became overexposed to private equity.

PIP 16 will be Tiger Global’s 15th fund (it skipped No. 13). Its first close will be Jan. 18, and investors who participate will get a reduced management fee of 1.75%, the firm said in the letter.

The fund will make investments over a period of at least two years. At $6 billion, it will be Tiger’s third-largest private vehicle. PIP 15 closed earlier in 2022 with a record $12.7 billion.

Over almost two decades, the PIP funds have generated a net internal rate of return of 24%, according to the letter. Twelve investments generated more than $1 billion of gains each.

Still, the firm had to mark down underperformers, it said in the letter. Most of the fund’s bets were in early-stage companies, with an average investment size of $30 million -- less than the typical $50 million.

Tiger Global did 275 deals so far this year, compared with 383 for all of 2021, according to PitchBook data. The firm’s current portfolio of active investments are worth about $45 billion.

“Fundamentals remain strong across the portfolio” and some of the larger companies “are preparing to go public when markets are supportive,” the firm said in the letter.