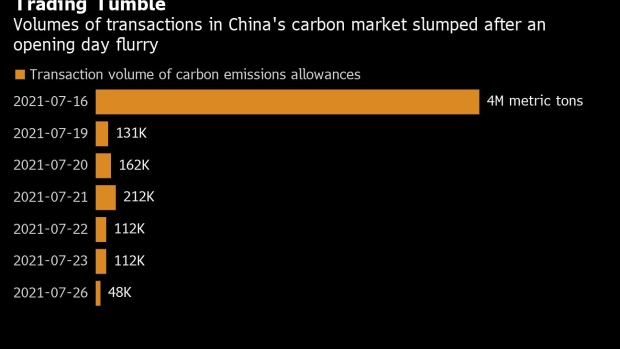 (Bloomberg) -- China’s national carbon market, seen as a key tool to help the world’s top polluter curb emissions, is being hampered by limited early access for small companies and doubts over data quality, according to people familiar with the details.

Only about a dozen large companies were given logins to allow them to participate as the market opened earlier this month, and access is being extended slowly to the rest of about 2,200 power firms covered by the market’s first stage, according to the people, who requested anonymity to discuss the issues.

There are also concerns over the reliability of emissions data being provided to authorities and used to calculate pollution rights, or allowances. Authorities last month flagged irregularities with Inner Mongolia Erdos High-tech Materials Co. and ordered the firm to resubmit calculations for 2019.

Even as more power sector firms get access, volumes are unlikely to surge, according to Chen Xin, an analyst with Cinda Securities. Many utilities with carbon allowances plan to wait until there’s more clarity on the market’s development before they commit to large trades, while other participants still lack staff with sufficient expertise, he said. Similar caution meant liquidity was also limited in China’s earlier regional pilot markets.

The Ministry of Ecology and Environment, which oversees the market, and the Shanghai Environment and Energy Exchange, which hosts the trading, didn’t immediately respond to requests for comment.

After a splashy trading debut on July 16, when state-owned oil and power giants including China Petroleum & Chemical Corp., known as Sinopec, and China Energy Investment Corp., helped push trading volumes to more than 4.1 million metric tons, activity on the market has cratered. Transactions totaled 48,000 tons on Monday, less than half of Friday’s volume, while prices slumped 4.4% to record a first daily decline.

Emissions totaling about 4.5 billion tons of carbon dioxide equivalent are covered under the trading system this year, which compares to China’s national total of 14.09 billion tons in 2019. Plans to quickly extend the market beyond the power sector to include producers of steel, cement and petrochemicals could see about 70% of China’s emissions covered.

Efforts to add more industries will be reliant on better data gathering, according to Bloomberg Intelligence analyst Esther Tsang. Only about 11% of firms in eight industries being targeted for the market’s next phases have published statistics on greenhouse gas emissions, she said.

“Businesses may not have appropriate governance and systems to collect the necessary information, and lack a set of established best practices to ensure data quality,” Tsang said.