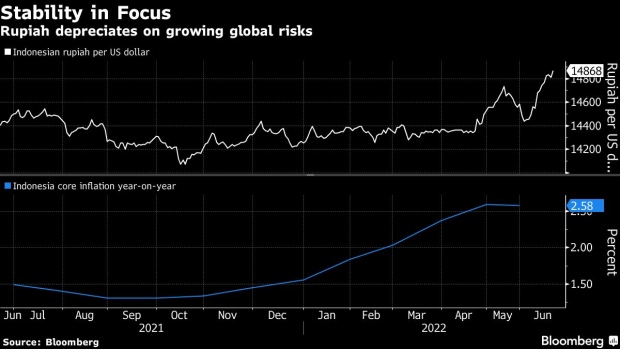 The lobby of the Bank Indonesia headquarters in Jakarta, Indonesia, on Tuesday, June 21, 2022. Indonesia's central bank is scheduled to announce its monetary policy decision on June 23. Photographer: Rony Zakaria/Bloomberg , Bloomberg

All 25 economists surveyed by Bloomberg see Bangko Sentral ng Pilipinas raising its benchmark rate, with 17 predicting a quarter-point increase and the rest a half-point move. Twenty four of 33 surveyed on Bank Indonesia’s decision see no change, with the rest expecting a 25 basis-point hike.

Central bankers have signaled no hurry to match the Federal Reserve’s accelerated pace of monetary-tightening. BSP’s incoming governor Felipe Medalla this week downplayed the need for jumbo hikes to curb inflation, while BI’s Perry Warjiyo Wednesday said there was no need to tighten until there was evidence of fundamental inflation pressure.

Here’s what to watch out for in Thursday’s decisions:

While Indonesia’s headline inflation is expected to average 4.2% this year, breaching the central bank’s 2%-4% goal, markets will be looking for the policy makers’ views on core inflation -- the gauge tracked by BI to determine rate settings.

The core measure -- which strips out volatile fuel and food items -- will likely stay below 3.5% as demand-side price pressure appear to decline amid rising energy prices, according to analysts in PT Bahana Sekuritas led by Satria Sambijantoro. They see a cumulative of 50 basis points of rate hikes this year, starting in July, as enough to match the Fed.

“Bank Indonesia has room to be more dovish than the consensus thinks, while still being ahead-of-the-curve,” Sambijantoro said.

However, the weakness in the rupiah remains a key trigger point for rate hikes. The currency has fallen 1.9% so far this month to trade around 14,868 per dollar.

“We believe BI will tolerate current rupiah levels as the depreciation so far has been relatively contained,” said Brian Tan, an economist at Barclays Bank Plc in Singapore, who sees BI’s rate at 4.25 by the end of the year.

With BSP widely seen to increase rates, investors will be watching for Benjamin Diokno’s comments, his last as governor before taking charge as the nation’s finance secretary. Diokno has already highlighted that he and his successor Medalla are on the same page on policy matters.

Diokno himself would continue in the central bank’s board as a member, suggesting policy continuity and little scope for surprises. He’s expected to reiterate his preference for gradual pace of normalization to tackle broadening price pressures.

“Inflation has started to broaden, and is likely to continue to do so as the economy recovers and labor-market conditions improve,” said Jonathan Koh, economist at Standard Chartered Plc in Singapore.

BSP’s gradual approach to rate increases, compared to larger moves by global monetary authorities, has pushed the peso lower against the dollar. The local currency fell to its lowest since 2005 this week, potentially adding to cost pressures in a nation that imports goods from fuel to rice.

Philippine Peso Drops to Lowest Since ‘05 on Dovish Central Bank

“We will watch for any changes in the tone of the monetary policy statement,” said StanChart’s Koh, who sees the BSP’s key rate at 3.5% by the end of this year.