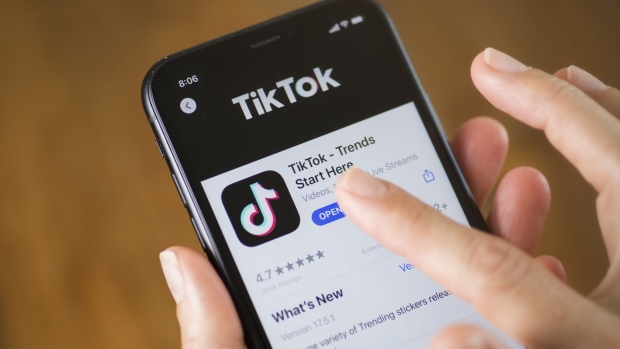 (Bloomberg) -- In August 2020 professional dancer Brian Esperon posted a 15-second video to TikTok of choreography set to WAP, an explicit new song from Cardi B and Megan Thee Stallion, which was viewed more than 100 million times. Today he can struggle to reach even 1% of that audience.

Esperon was one of the TikTok creators that helped ignite a dance-video craze on the app that turned it into a staple of US digital life. But like all trends, it’s now losing steam.

That’s shaken the network of advertisers, music labels and influencers that organized their time and spending power around the video trend. While that’s not necessarily bad for TikTok, it marks a new phase of its commercial life — one that is less reliant on smaller, unknown creators and more on big names and companies with deep pockets.

“Nothing stays the same on the internet,” said Jamie Cohen, an assistant professor of media studies at CUNY Queens College. “For better or worse.”

TikTok, a unit of China’s Bytedance Ltd., was already popular in Asia when the Covid-19 pandemic hit. The circumstances of the virus helped it gain traction in the US. Creators already on the platform, including dancers Charli D’Amelio and Addison Rae, saw their follower counts soar as the newly homebound devoted more time to social media.

♬ His & Hers - Internet Money & Gunna

However, the success of TikTok, which says it has more than 1 billion monthly users, has created new hurdles. The algorithm embedded in the app, which delivers new content to users in a tailored “For You” page, is designed to pinpoint the niche interests of TikTokers as it gathers data on them. Users are now viewing a wider breadth of videos from more people.

Esperon said it’s harder to get noticed in this crowded environment. He regularly achieved viral success when he joined in late 2019, but has only rarely been able to reach 1 million people with his videos this year. In June, D’Amelio lost her place as the most popular account on TikTok to a creator named Khaby Lame, who posts comedic reactions to how-to videos.

“In TikTok’s early days, in particular, what drew creators, especially smaller creators, is this idea that they could reach TikTok fame and go viral by one piece of content,” said Jasmine Enberg, principal analyst at marketing research firm Insider Intelligence. Now, “TikTok is much more saturated.”

Many companies are navigating the change by seeking out creators who are already famous. A dance video to Lizzo’s About Damn Time became one of app’s most popular of the year, with a clip of Lizzo performing it herself viewed almost 60 million times. (The dance itself was created by a choreographer named Jaeden Gomez.) Other chart-topping hits of 2022, such as Sam Smith’s Unholy, have had similar artist involvement.

Some have dramatically simplified the dances to capture the increasingly divided attention of audiences. The pandemic dance videos included intricate routines made by professional choreographers. This year, a dance set to Taylor Swift’s Bejeweled went viral with only three moves: a walk, turn and a finger wiggle.

Against The Grain, a digital marketing agency that runs around 3,000 campaigns per year, began facilitating dance challenges in 2020. That type of work, which usually consists of paying TikTok creators to create dances to certain songs, has decreased about 90% in two years, according to Omid Noori, who co-founded the company with Ramzi Najdawi. Their team now focuses more on working with music curators and other influencers to capitalize on trends of the moment.

Others are spending money on other platforms that copied TikTok’s dance trends, such Meta’s Instagram Reels and YouTube Shorts, and are still adding users attracted to the short-form video genre. They are typically either paying influencers to make songs to certain dances, or for the platforms to increase the visibility of individual videos or hashtags. Esperon said he was paid thousands of dollars to participate in a dance challenge for K-pop group Blackpink on YouTube Shorts.

To be sure, TikTok is still extremely popular. The platform received almost $10 billion in global revenue from marketers this year, according to an October report from Insider Intelligence and eMarketer. That number is expected to rise to more than $14 billion in 2023. But the nature of spending remains in flux.

TikTok has added tools to attract new advertisers, including smaller ones without major marketing departments. For example, it built a database of 800,000 creators and created search functions that will connect them to advertisers. The platform also highlighted trends it thinks will take off in 2023, including videos where people demonstrate a new product in an entertaining way or content that highlights self-care and societal values.

Johnny Cloherty, co-founder and chief executive officer of Songfluencer, a music marketing agency that’s produced work on behalf of artists such as Bruno Mars and Gayle, said companies are always seeking to find the platform where ads have the greatest chance of success.

The platforms have “a firehose of money to spend,” he said. “I think we’re going to have another streaming war on our hands.”