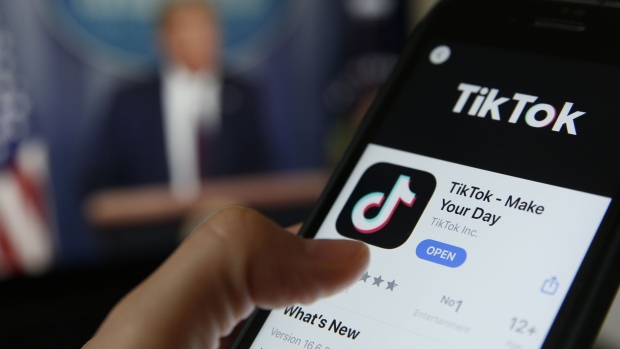 The TikTok app is displayed in the app store in this arranged photograph in view of a video feed of U.S. President Donald Trump in London, U.K., on Monday, Aug. 3, 2020. TikTok has become a flash point among rising U.S.-China tensions in recent months as U.S. politicians raised concerns that parent company ByteDance Ltd. could be compelled to hand over American users’ data to Beijing or use the app to influence the 165 million Americans, and more than 2 billion users globally, who have downloaded it. Photographer: Hollie Adams/Bloomberg , Bloomberg

TikTok will continue to operate its hit music video app in the U.S., whatever comes of the threatened Trump administration ban on its business, senior executive Vanessa Pappas said.

“We believe we have multiple paths forward to ensure that we continue to provide this amazing app experience to the millions of Americans who come to rely on it every day," Pappas said Thursday in one of her first interviews since U.S. President Donald Trump issued executive orders calling for the sale of TikTok’s U.S. business by its Chinese owner, ByteDance Ltd., or a complete shutdown of its American operations, citing national security concerns.

The White House has been ratcheting up a fight with China's government and businesses and has issued restrictions on a number of Chinese tech giants, including Huawei Technologies Co. and Tencent Holdings Ltd. Trump issued an executive order on Aug. 14 requiring TikTok to divest its U.S. business within 90 days under a ruling by the Committee on Foreign Investment in the U.S., or CFIUS.

“We’ve made it clear that we strongly disagree with the conclusions of CFIUS and we're certainly disappointed in the outcome that we saw there,” said Pappas, general manager of TikTok’s business in the U.S., Canada, New Zealand and Australia. “We still haven't been presented with any evidence to back up those claims and assertions.”

Meanwhile, employees say they are following a daily drumbeat of reports over who might purchase the company’s U.S. business and become their new employer. Microsoft Corp. confirmed its pursuit of TikTok on Aug. 2, but Oracle Corp. and Twitter Inc. are among other tech companies that have explored bids, people familiar with the negotiations have told Bloomberg News.

Before Trump called for ByteDance to divest its TikTok ownership in the U.S., the president ordered Americans to stop doing business with the company as of mid-September. Employees say they have asked questions about whether they’ll get paid after the order takes effect, and whether foreign workers could lose their visas, which afford them the right to live and work in the U.S. and are tied to their employment.

Pappas declined to comment on the deal negotiations but said she’s tried to provide staff with multiple forums to express their fears and concerns openly, including weekly town hall sessions where she answers questions from TikTok’s 1,500 U.S. employees anonymously. She said the company hasn’t seen any exodus of staffers and pointed to India, where Bytedance has continued to pay workers despite a ban on TikTok in the country.

“We're in extremely turbulent times. So our messaging is really, just let's focus on the things that you can control,” she said. “With pay, our commitment again has been steadfast. We have not wavered in our commitment either to our users or to our employees, that we believe we are here for the long run.”