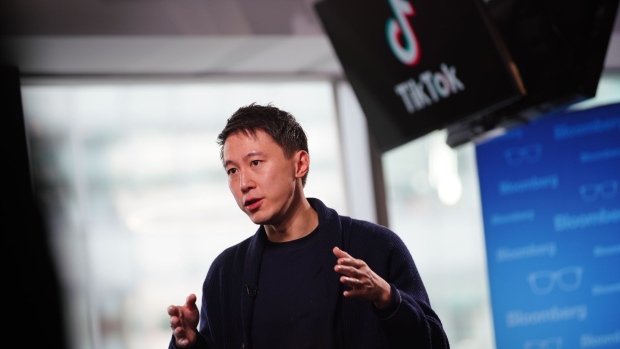 Shouzi Chew, chief executive officer of TikTok Inc., during an interview for an episode of "The David Rubenstein Show: Peer-to-Peer Conversations" at the TikTok office in New York, U.S., on Thursday, Feb. 17, 2022. ByteDance Ltd.'s TikTok has emerged as the top challenger to the social media dominance of Meta Platforms Inc., the parent company of Facebook and Instagram. , Bloomberg

(Bloomberg) -- Video app TikTok Inc., in a letter to nine US senators who accused it of monitoring US citizens, said it is working to meet concerns over its data-sharing practices.

Republican Senator Marsha Blackburn of Tennessee said Friday that the letter demonstrates why TikTok executives need to testify before lawmakers and explain its relationship to the ruling Chinese Communist Party, or CCP.

“TikTok’s response confirms our fears about the CCP’s influence in the company were well founded,” Blackburn told Bloomberg. “The Chinese-run company should have come clean from the start, but it attempted to shroud its work in secrecy. Americans need to know if they are on TikTok, Communist China has their information.”

Several senators, all Republicans, in a June 27 letter cited a report in Buzzfeed News that said TikTok’s US consumer data was accessed by company engineers in China. The lawmakers said in the letter that TikTok and its parent ByteDance Ltd. “are using their access to a treasure trove of US consumer data to surveil Americans.” The New York Times reported earlier on TikTok’s response.

The senators’ letter and pressure from a Republican member of the Federal Communications Commission “increase TikTok’s US political exposure,” Paul Gallant, an analyst with Cowen & Co., said in a note Friday.

A settlement with US authorities “is more likely than an outright ban,” Gallant said. “But we raise the chances of an eventual ban from 10% to 35%.”

Former President Donald Trump tried to ban the app and force ByteDance to sell TikTok’s US business over what he claimed were security risks. The action was challenged in court and President Joe Biden revoked Trump’s ban in June of 2021 and replaced it with his own executive order.

In the US, TikTok has been installed 321.6 million times, according to SensorTower, which analyzes app growth.