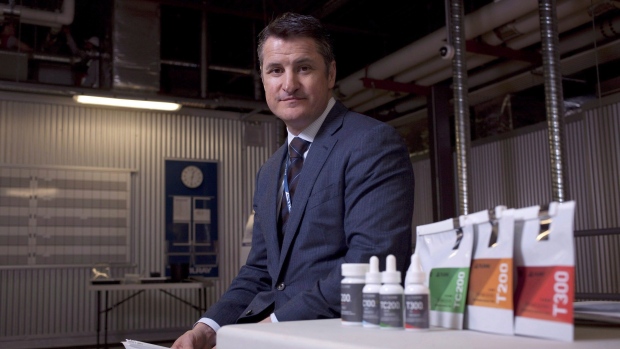 Tilray President Brendan Kennedy is photographed with some of the Tilray product line such as capsules, oils, and dried marijuana at head office in Nanaimo, B.C., on Thursday, November 29, 2017. , The Canadian Press

Tilray shares fell as much as 15 per cent Tuesday to a record low after the cannabis company missed fourth-quarter revenue and Ebitda estimates and recorded US$181 million of writedowns and impairment charges.

Several analysts cut their price targets on the stock, and some questioned whether Tilray will be able to meet its goal of reaching positive Ebitda by the fourth quarter of this year. Tamy Chen at BMO believes that won’t happen until 2022, in which case it will need to raise an additional US$240 million of funding. 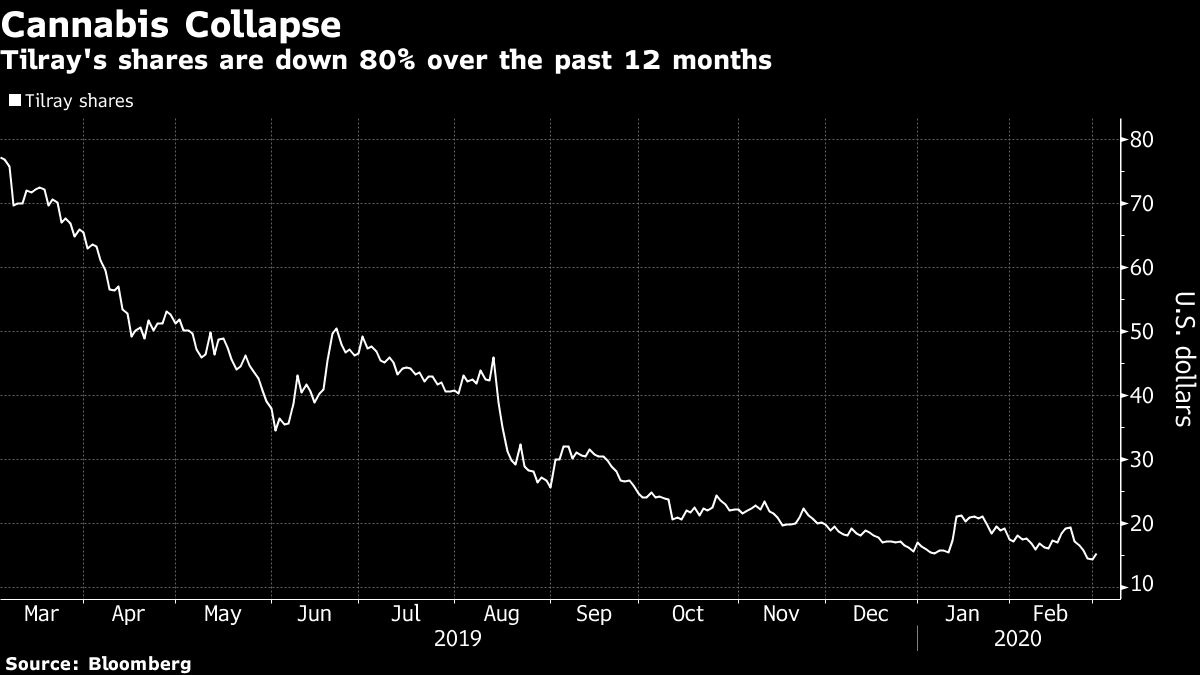 Kreindler cut his rating on Tilray to neutral from buy and lowered his price target to US$17 from $26.

“Our neutral rating is based on our belief that Tilray possesses a well-balanced domestic medical and adult-use portfolio, an institutional quality management team and high option value in international medical and U.S. CBD markets, offset by a premium relative valuation and a capital position that trails a number of its large cap” Canadian peers.

Kreindler said he remains “cautiously optimistic” as Tilray ramps up its international medical sales and its Canadian derivative products, but will await improved market conditions before incorporating additional upside into his model.

Despite Tilray’s sales and Ebitda miss and an average net price for recreational cannabis that’s the worst in Cantor’s coverage universe, “downside may be somewhat buffered by management’s optimistic outlook commentary (relative to peers).”

Zuanic noted that Tilray expects 2020 sales to be about double 2019’s, gross margin gains of close to 10 points for the year and positive Ebitda by the fourth quarter.

“Still, because of the company’s well below average realized net pricing, we are more skeptical about a path to positive Ebitda, which combined with aggressive guidance, leaves room for disappointment.”

“We believe it is currently unclear if the company’s liquidity position and existing funding sources will be sufficient in supporting the business until it becomes profitable, which we forecast will be sometime in 2022.”

Chen said she expects Tilray will require an additional $240 million through its at-the-market equity program to fund its operations over the next two years.

She also noted that Tilray, like its competitors, has been unable to consistently supply edibles to the Canadian recreational market due to issues with production capacity. “Our sense is that the company’s ramp to increase edibles production will be gradual.”

Maintains market perform rating, cuts price target to US$15 from US$27.

Dionisio believes “the stock remains fully valued at current levels, and we would likely await greater visibility in increased industry sales and improved product mix from the advent of sales of advanced delivery forms in Canada, which just began two months ago, before becoming more bullish.”

The quarter-over-quarter decline in gross margin “reversed the positive momentum the company had been generating in recent quarters,” and resulted from declining medical and bulk cannabis sales.

“Given Tilray’s disappointing top-line momentum seen in 1Q, we are lowering our 2020 forecast for revenue from US$337 million to US$295 million.” Maintains neutral rating, cuts price target to $17 from $24.

Tilray’s 15 per cent 4Q revenue miss, stemming largely from its inability to successfully navigate Canada’s lingering weak legal-cannabis prices, raises execution risk amid its aggressive “Cannabis 2.0” product launch in those competitive markets. The company’s stretched finances may further limit its ability to use acquisitions to aid its efforts.