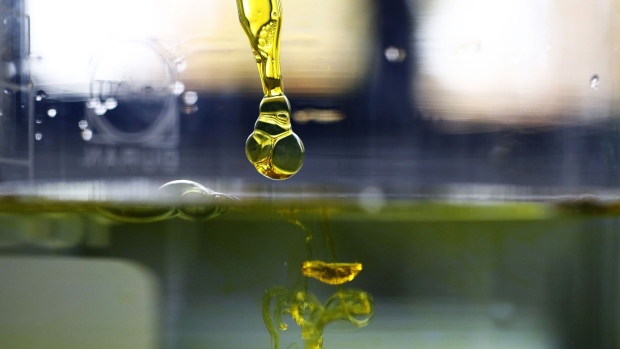 A sample of water-soluble full spectrum cannabidiol (CBD) oil is dropped into water inside the laboratory facility at KannaSwiss GmbH in Koelliken, Switzerland, on Thursday, Oct. 19, 2017. , Bloomberg

Tilray Inc. (TLRY.O) has imported its first bulk supply of medical cannabis oil into the U.K., after controversy over the confiscation of one of the Canadian company’s products led to an easing of restrictions.

The oral solution, containing both the psychoactive THC and non-intoxicating CBD compounds, is used to treat pain, chemotherapy-induced nausea and vomiting and multiple sclerosis-associated spasticity. It has already been supplied in bulk to Germany, Croatia, Cyprus and Malta.

Another cannabis-based Tilray product that helps treat epilepsy was confiscated last year from a Northern Irish child, Billy Caldwell, sparking a media campaign to permit the substance for medical use. The U.K. government in November made it legal for specialist doctors to prescribe medical marijuana for patients with severe clinical need.

“This allows us to hold a reliable supply in the U.K. so we can avoid having to import on a per-patient basis, shortening the amount of time from prescription to the patient getting the product,” Catherine Jacobson, Tilray’s vice president of medical and regulatory affairs, said in an interview.

“If access is too difficult patients will just go to the black market,” she said. “We’ve seen that happen and it’s really dangerous for patients.”

The Nanaimo, British Columbia-based cannabis company is also hoping to import bulk supplies of its five other medical cannabis products into the U.K. by the end of the year.

Cameron Hurst of Equium Capital Management, gives his outlook for shares of Tilray.

Tilray, which has joined forces with Budweiser brewer Anheuser-Busch InBev NV to research cannabis-infused beverages, is focused on health uses in its European operations for now, Jacobson said.

“Any company has to look at all the markets available to them but we are steadfastly focused on the medical market,” Jacobson said.

The company has also signed a partnership with Swiss drug giant Novartis AG to develop and distribute medical marijuana in legal jurisdictions around the world. The Canadian company is in talks with research groups in the U.K. to launch clinical trials in the country, she said.