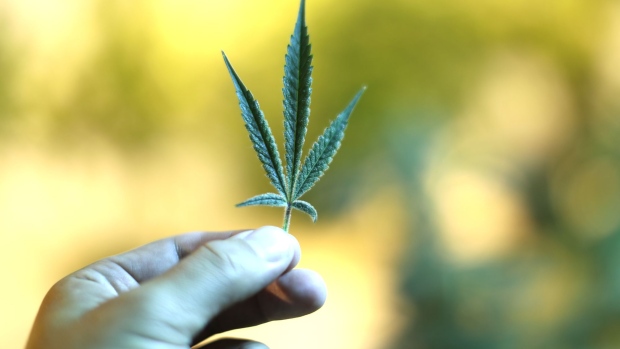 A marijuana leaf is displayed for a photograph at a Bonify grow facility in Winnipeg, Manitoba, Canada, on Wednesday, July 12, 2017. A year before recreational cannabis is expected to become legal in Canada, there\'s an explosion in companies cultivating the stuff. Some 51 enterprises have gotten the green light to grow pot, and 815 applicants are in the queue. Photographer: Trevor Hagan/Bloomberg , Photographer: Trevor Hagan/Bloomberg

(Bloomberg) -- Tilray Brands Inc. made progress on its plan to become a leader in cannabis drinks in the third quarter, helping to fuel a share rally, while the Canadian pot company’s chief executive officer said a supermarket deal will spark new opportunities.

The company, which is mostly known for Canadian marijuana, has expanded into beverages with recent acquisitions. The drinks segment was the standout of the quarter, with sales surging 64% from a year earlier to $19.6 million, exceeding expectations. Tilray reiterated its target for $4 billion in revenue by the end of fiscal 2024.

Tilray shares surges as much as 16% on Wednesday.

The results show how Tilray is working to establish a permanent presence in the alcohol space. The company is integrating acquisitions of Sweetwater Brewing Co., now the 10th-largest craft brewer in the U.S., Breckenridge Distillery, a bourbon maker, as well as Alpine Beer and Green Flash Brewing.

“The spirits business and the cannabis business -- there’s a lot of synergies between them,” Chief Executive Officer Irwin Simon said in an interview following the results, noting that if cannabis is drawing new customers from any other industry, it’s alcohol.

Cannabis drinks have advantages, he added. “There are a lot of studies out there where, if you have a drink infused with THC, you don’t have the same affects afterwards that you have with alcohol,” he said. He sees tequila and bourbon infused with THC competing with the alcoholic versions of the spirits at bars.

Cannabis and alcohol companies have teamed up in the past in search of beverage-fueled growth. Molson Coors Beverage Co. has partnered with Hexo Corp. while Canopy Growth Corp. counts Constellation Brands Inc. as a major shareholder and is developing its own beverages.

Alcohol-cannabis deals are seen as a way to arbitrage U.S. legalization, given they help U.S. companies gain experience with CBD or THC products despite the federal prohibition on cannabis. Beverages can also help companies to develop distribution networks that could be used for cannabis when the situation changes.

Simon said that while the company is expanding into alcohol and wellness products, cannabis will continue to be its mainstay.

Tilray also announced an agreement with Amazon.com Inc.’s Whole Foods Market to sell Manitoba Harvest brand powdered hemp with matcha and greens, which can be blended with beverages. This shows Tilray is making inroads with its wellness products, which also could help widen its distribution channels.

Simon, who was formerly CEO of snack and tea maker Hain Celestial Group Inc., said that once brands have their foot in the door with the high-end grocery chain, other opportunities arise. “Ultimately what happens, is then you get sold through Amazon Prime.”