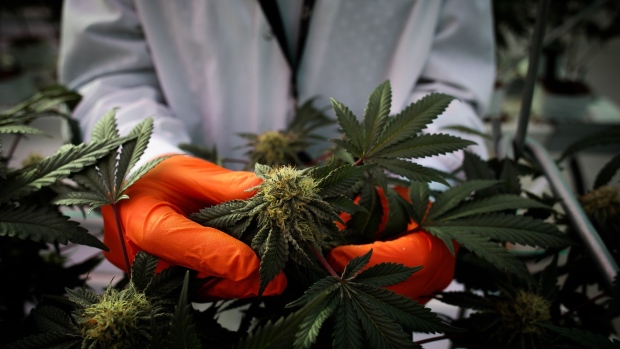 (Bloomberg) -- Tilray Inc. shares surged the most in more than five months as investors rewarded the cannabis company for profiting even amid challenges due to Canada’s Covid-19 restrictions.

Net income was $33.6 million for the fiscal fourth quarter ended May 31, compared to a loss of $84.3 million in the year-earlier period, while Ebitda almost quadrupled to $12.3 million, the Leamington, Ontario-based company said in a statement today. It was the company’s first quarterly report since it merged with Aphria Inc.

Executives anticipate being through the worst of Canada’s lockdowns before the current quarter ends on Aug. 31, though the virus remains unpredictable. Because hundreds of dispensaries didn’t open due to Covid, more people bought cannabis online, where regulations severely restrict companies’ ability to market and consumers opt for low prices over specific brands, Tilray’s chief executive officer said on a conference call.

“Considering the challenges of ongoing lockdowns in Canada due to Covid-19, we had a strong quarter,” Irwin Simon said in a phone interview. He also emphasized that the company’s cash position -- $488.5 million -- potentially enables Tilray to pursue acquisitions of other cannabis companies that could help it enter the U.S. market should the U.S. decide to federally legalize marijuana.

Free cash flow also grew in a quarter that analysts had cautioned would be messy because it’s the first reporting period since Tilray combined with Aphria to form a new giant in the industry. Tilray said it’s already benefited from $35 million in cost synergies from that combination and remains on track to deliver the originally projected cost savings of $80 million over the next 16 months.

Aside from the company’s core cannabis business, Simon said tha plans to roll out new alcoholic drinks through Aphria’s acquisition of Sweetwater Brewing Co. were going well. Aside from beer, the company also makes hard seltzers, and will be expanding into canned drinks based on hard liquor and wine, he said.