Why the cost of shorting Tilray has suddenly soared 900%

The top shareholder in volatile cannabis stock Tilray Inc. (TLRY.O) has said it won’t sell any stock when a lockup expires next week, boosting the pot stock's gain since the beginning of the year to 44 per cent.

The expiration of Tilray’s lockup period will give Privateer Holdings Inc., which owns about 76 per cent of the company’s outstanding shares, its first opportunity to sell following a nearly 500 per cent rally in the stock since the initial public offering. A total of about 66 million subordinate voting shares will be freed for trading, according to company filings.

But Privateer cut the anticipation short with a statement Friday that said it has no plans to register, sell or distribute the 75 million Tilray shares it owns. That triggered a 24 per cent rally that on Friday alone yanked US$76 million from the stock’s short-sellers, according to financial analytics firm S3 Partners.

“Privateer Holdings strongly believes in Tilray’s long-term global growth strategy and pioneering role in shaping the future of the legal cannabis industry,” Managing Partner Michael Blue said in the statement, adding that it won’t sell any shares during the first half of 2019. “When we decide to distribute shares, we will do so in an orderly and deliberate manner.”

Nanaimo, British Columbia-based Tilray has been on a wild ride since its IPO, with shares rising as much as 1,665 per cent to an intraday high of US$300 in September and tumbling more than 70 per cent since then. It’s the only pot producer to IPO in the U.S. and the only one to be listed solely on a U.S. exchange -- the Nasdaq -- without a concurrent Canadian listing. That’s made it highly attractive to American investors hungry for cannabis investments, but it’s also made it a target of short sellers. 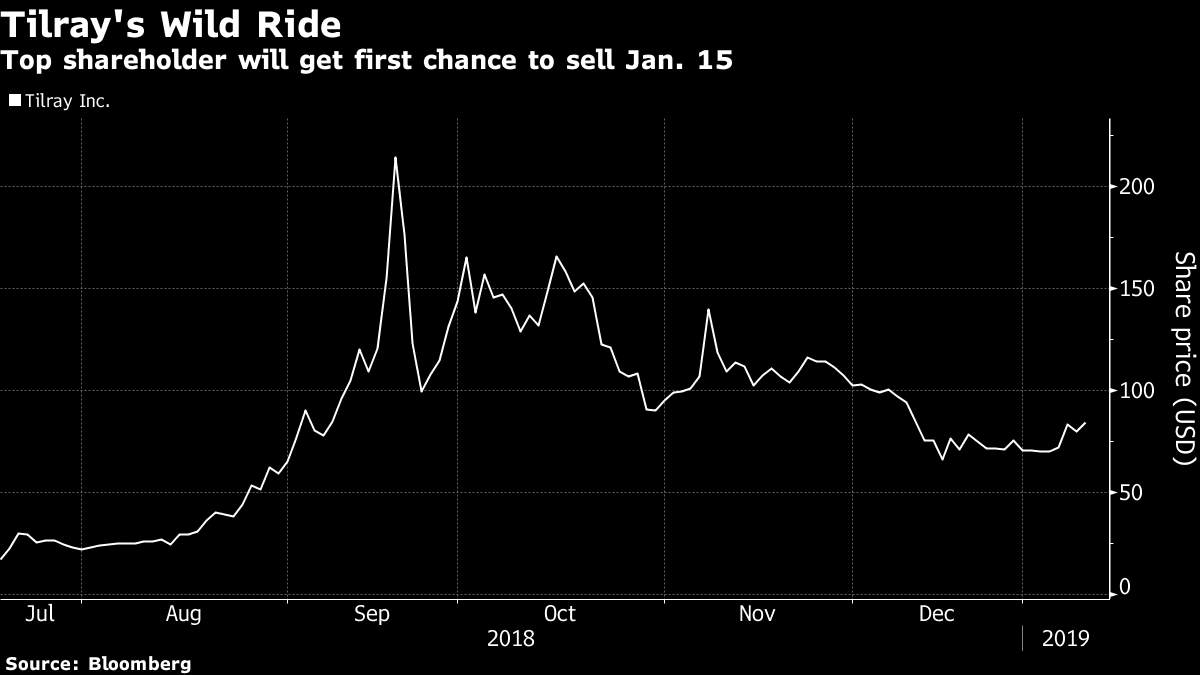 The cost to finance a new short position in Tilray hit a high of 900 per cent on Wednesday and pared just slightly to 850 per cent by Friday, according to S3 Partners. The extremely high borrowing cost may be tied to the limited availability of shares, and therefore may come down once the lockup period expires.

Still, analysts are largely positive on the stock, with an average price target of US$128, about 25 per cent above current levels, according to Bloomberg data. The stock’s rally this year has cost short sellers US$129 million in mark-to-market losses, after mark-to-market losses of US$302 million last year.

Piper Jaffray analyst Michael Lavery initiated coverage of Tilray with the equivalent of a buy rating and a US$90 price target last week, saying the firm is “well positioned to be one of several likely winners” in the cannabis industry given its recent partnerships with Novartis AG and Anheuser-Busch InBev SA. However, Lavery also cautioned that the lockup expiry could pose a near-term risk to the shares.

“There is a risk that insider holders (~77% of shares) might reasonably take some profits, especially given that the shares trade at over 3x the IPO offering price,” Lavery wrote in a note published Jan. 8. “However, while we recognize the potential risk for near-term weakness from any selling from the lock-up expiry, we still see long-term value in the stock.”