With Tilray Inc.'s first quarter following its blockbuster deal to merge with Aphria Inc. now in the rearview mirror, CEO Irwin Simon is keeping his foot on the gas pedal to maintain the company's top spot in the Canadian cannabis market.

As Canada's economy opens back up following months of pandemic-caused lockdowns, cannabis producers are looking to take advantage of a consumer base eager to spend on legal pot products and hopefully end a string of disappointing quarterly losses.

Simon said he's optimistic that once people can visit pot stores again, they'll eschew the cheap cannabis products they may be unhappy with and pay a little extra for Tilray's offerings.

"We're going after growth with new products, new stores opening and more awareness with our brands," he said.

Simon noted that he is engaged with federal and provincial regulators to find a better way to advertise Tilray's cannabis products to Canadians, a complex undertaking to avoid running afoul of Canada's strict laws on marketing marijuana.

He also has ambitious plans to maintain the company's momentum across a portfolio that includes hemp foods, craft beer, and a German pharmaceutical distribution business and generate US$4 billion in sales by the end of its fiscal 2024.

"We are out there lobbying the government, we're all over that," Simon said. "We will be aggressive on our own and we might get our hand slapped."

Some of those revenue gains will come from acquisitions to bolster its hemp food and beer business, but Simon also indicated that he's looking closely at staking Tilray's claim to a possible U.S. cannabis operator through an option deal ahead of U.S. lawmakers passing a legalization bill, without providing specifics.

"We have close to a half a billion dollars of cash on our balance sheet," Simon told analysts earlier on Wednesday. "We have great liquidity within our stock. We have a very experienced management team and we have a good history of knowing how to grow great cannabis with great strength. So I'm not sure why [U.S. operators] would not want to partner with us."

Simon's comments come after Tilray generated US$142.2 million in revenue in its fiscal fourth quarter, an increase of 25 per cent from a year earlier. The New York-based pot producer said its cannabis sales rose by 36 per cent in the quarter to US$53.7 million, while its German pharmaceutical distribution business saw a 10 per cent revenue slump to $66.8 million. 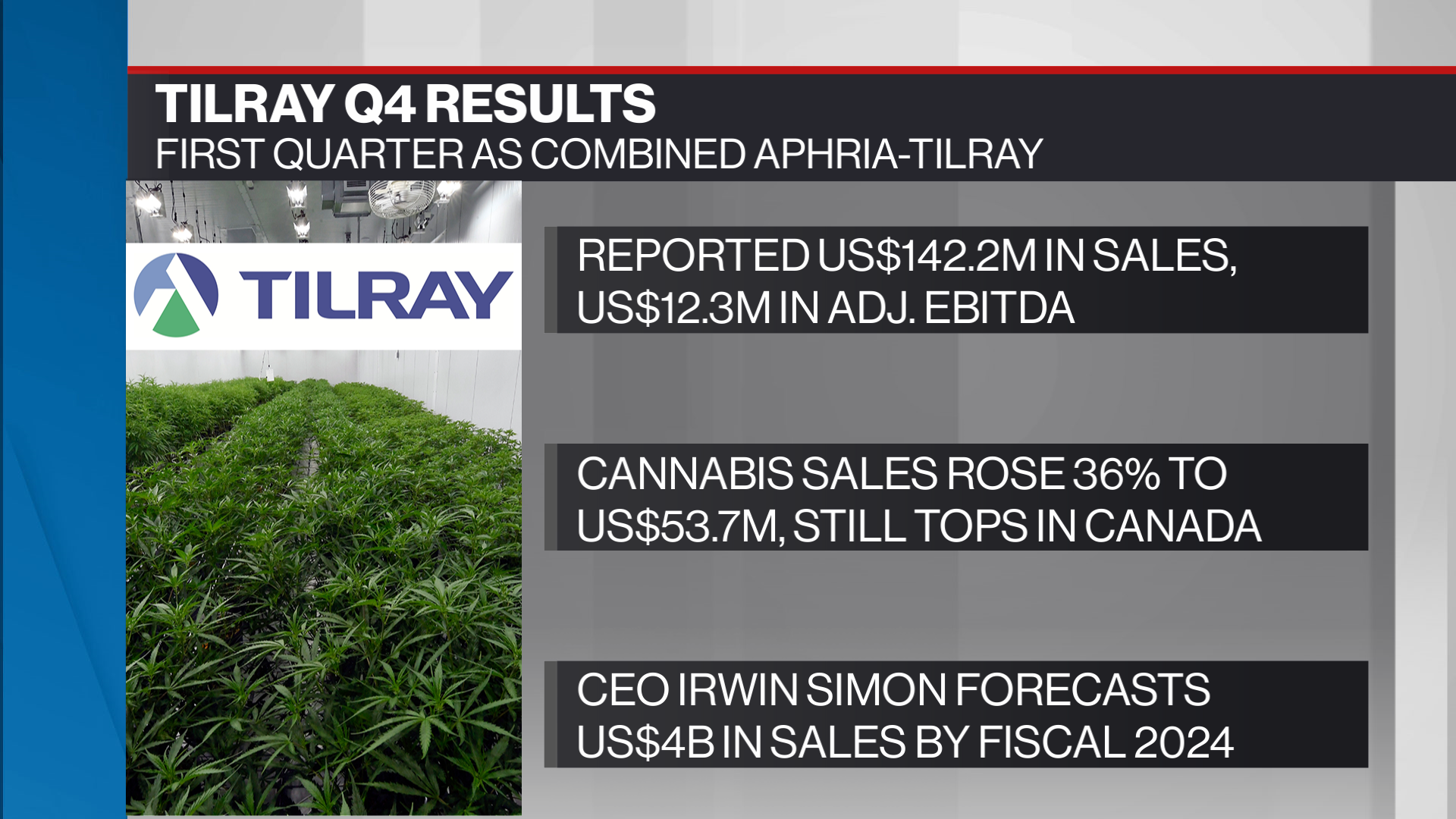 The company reported US$12.3 million in adjusted earnings before interest, taxes, depreciation, and amortization (EBITDA) and said it has achieved US$35 million in cost savings following the merger of the two cannabis companies. It expects to save US$80 million in costs over the next 16 months, the company said in a statement.

The quarterly results only provide one month of combined Tilray-Aphria financial results as the two companies closed their merger in the middle of their fourth quarter.

"We believe the company will continue to post improving profitability in successive periods as it realizes benefits from these [merger] integration efforts," said Matt Bottomley, analyst at Canaccord Genuity.

Tilray said it took a US$19.9 million write-down as a result of "excess inventory quantities" in the quarter. Most Canadian cannabis companies have been plagued by oversupply concerns as a result of growing too much unsaleable pot over the past year.

Tilray said it gained market share in the Canadian cannabis market each month since April, although it didn't provide specifics. Tilray had about 16 per cent of the Canadian market in June, above Hexo Corp. and Canopy Growth Corp., both of which control about 13 per cent of the market, according to industry data provider Hifyre.

"When you're at the top and doors are open, everyone else is going to pick at you," Simon said. "That's why we can't lose our entrepreneurial spirit. We’ve got to be nimble and flexible and can never be too big not to fail."

Tilray was expected to report about US$150 million in revenue in its fourth-quarter while posting US$5.8 million in EBITDA, according to analysts polled by Bloomberg.

For the full fiscal year, Tilray reported a 27 per cent increase in revenue to US$513 million while reporting a US$336 million net loss. The company ended the year with US$488.5 million in cash.