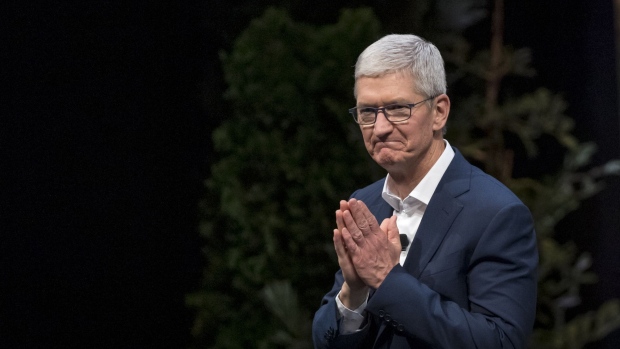 Nine years after Steve Jobs stepped down and thrust Tim Cook to the top of Apple Inc., the company is more valuable than ever -- and so is Cook.

Apple’s share price rose almost 5 per cent last week, leaving the company Jobs co-founded 44 years ago in his parents’ California home on the cusp of stock-market milestone: a market value of nearly US$2 trillion.

It was valued at about US$350 billion when Jobs died. Cook, meantime, has joined one of the most elite clubs for CEOs who didn’t actually found the companies they run: his net worth has eclipsed US$1 billion, according to calculations by the Bloomberg Billionaires Index.

Cook’s net worth estimate is based on an analysis of regulatory filings and applying the market performance of a typical wealthy investor to his proceeds from share sales. Cook, 59, said in 2015 that he plans to give most of his fortune away and has already gifted million of dollars worth of Apple shares. His wealth could be lower if he’s made other undisclosed charitable gifts.

Josh Rosenstock, a spokesman for Apple, declined to comment.

“This tech cycle has been way bigger and longer than I thought,” said Hussein Kanji, a partner at venture capital firm Hoxton Ventures who expressed caution about Apple’s long-term outlook after Jobs left the company. “Out of all these stocks, Apple has become the greatest cash generation machine in history.”

Apple’s market value and Cook’s riches reflect the rise of the FAANG stocks, a phrase that didn’t even exist in the Jobs era. It also comes as Cook and his fellow Big Tech CEOs -- Jeff Bezos of Amazon.com Inc., Sundar Pichai of Alphabet Inc. and Mark Zuckerberg of Facebook Inc. -- face antitrust investigations into what their critics characterize as monopolistic powers.

While Bezos and Zuckerberg have huge stakes in the companies they founded, Cook’s path to the 10-figure-club was more incremental. The vast majority of his estimated wealth comes from equity awards he’s received since joining Apple in 1998, where he has drawn plaudits for mastering the company’s complex supply chain.

He got a massive award of restricted shares on his first day as CEO. The equity has paid out in annual increments, with part of them contingent on Apple’s stock outperforming at least two-thirds of firms in the S&P 500. Barring a sudden drop in Apple’s stock price, Cook is poised to receive his ninth payout from the award, consisting of 560,000 shares, later this month.

Around half of those will likely be withheld for taxes but the remainder should boost Cook’s fortune by another US$100 million. He currently owns 847,969 shares directly, or about 0.02 per cent of Apple shares, worth around US$375 million. Proceeds from previous share sales, dividends and other compensation add another US$650 million to his net worth, according to calculations by Bloomberg. Apple stock rose 1.4 per cent to US$450.79 at 2:07 p.m. on Monday.

Cook’s stake is small compared with the mammoth positions founders like Bezos, Zuckerberg and Tesla Inc.’s Elon Musk control at their respective companies. Apple shares are distributed widely among different investors and executives, so the world’s most valuable company has minted very few billionaires among its employees.

When Jobs stepped down in August 2011 and died soon after, Cook had already filled in as interim CEO on several occasions. But investors and analysts were concerned that Apple wouldn’t be able to innovate as much as it did in the past.

While Apple over the past decade hasn’t revealed a new product as groundbreaking as the iPhone, the company still has thrived. Cook has overseen the development of devices like the iPhone X and Apple Watch, new services like Apple Music, and research on new frontiers like self-driving cars and augmented-reality glasses.

Even the pandemic, which has hammered many other parts of the economy, has been a boon to Apple and other big tech companies as people have gotten even more reliant on their products and services.

Their recent success stands in contrast to the economic upheaval caused by the coronavirus: a growing string of bankruptcies, tens of millions unemployed and massive public deficits.

“We do not have a zero-sum approach to prosperity,” he said on a conference call. “Especially in times like this, we are focused on growing the pie, making sure our success isn’t just our success.”

--With assistance from Tom Maloney and David Gillen.