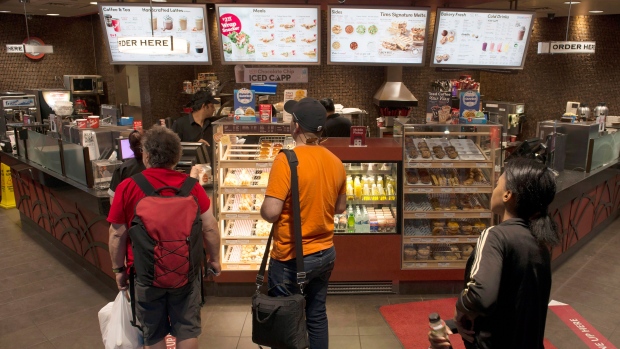 Customers line up to place their orders at a Tim Hortons restaurant in Toronto on Tuesday May 29, 2018. , THE CANADIAN PRESS/Doug Ives

TORONTO -- Some 1,500 Canadian Tim Hortons franchisees will receive a copy of a proposed settlement in two class-action lawsuits against their parent company today.

The document filed in the Ontario Superior Court of Justice could potentially result in the wrapping up of a long-standing battle over alleged advertisement fund mismanagement and other complaints from franchisees about the TDL Group Corp., a subsidiary of Restaurant Brands International (QSR.TO).

Franchisees will have until mid-April to accept the settlement terms or request to opt-out, though a judge will make an official deadline determination at a later date.

The two parties will meet again in court in late April where any dissenting voices will be heard and the judge will rule on the proposed settlement.

If approved, the settlement would close the chapter on a lawsuit filed in June 2017 and another in October of that same year.