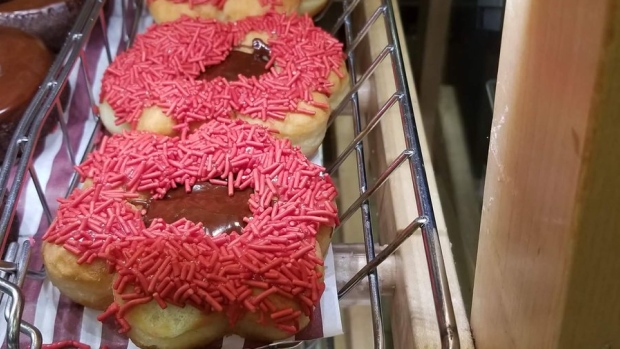 CALGARY — The head of the Calgary Poppy Fund and Veterans' Food Bank says he hopes no one gets in big trouble over a poppy-emblazoned doughnut sold at a local Tim Hortons.

John Rathwell says it seems good intentions were behind the gesture and it was admirable an employee at the restaurant would take the initiative.

But he points out the poppy is a registered trademark and a symbol that many hold sacred.

Rathwell says he would have preferred that the business reached out to his group ahead of Remembrance Day about partnering to raise funds for veterans.

The southeast Calgary Tim Hortons franchise where the doughnuts were sold declined to comment and the chain's head office did not immediately respond to a similar request.

The doughnuts caused a social-media stir after an image of them was posted from the popular Calgary Twitter account @Crackmacs.

One Twitter user responded by saying the move does not sit well and another said it isn't appropriate to cash in on Remembrance Day.

This isn't appropriate to cash in on Remembrance Day. Proceeds should go to charity. Make it right @TimHortons