Tim Hortons feels the heat from ramped up competition

The sales slowdown comes as about half of the company's Canadian Tim Hortons franchisees joined an unsanctioned organization to fight against what they say is their corporate parent's mismanagement of the coffee-and-doughnut chain.

The chain last registered comparable sales above 0.3 per cent during the third quarter of its 2016 financial year when the metric reached two per cent. 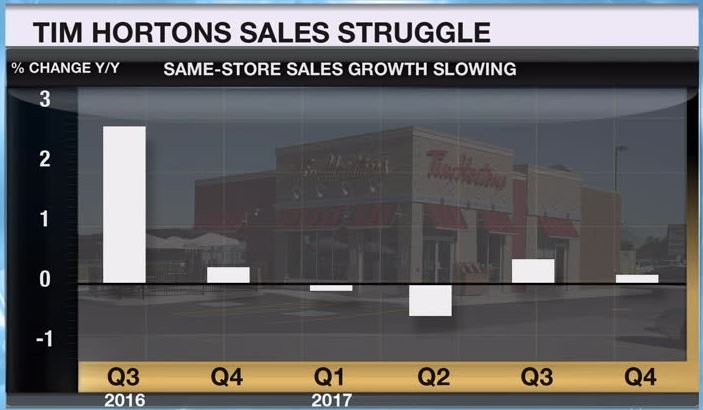 "We have seen some sequential improvement in the comparable sales of Tims in Canada," said CEO Daniel Schwartz in a conference call with analysts, pointing to the company's 0.8 per cent growth in the country during the most recent quarter.

He said a decline in part of Western Canada and softness in lunch time purchases led to the relatively flat results, but he hopes to build on the recent quarterly momentum by continuing to grow its recently launched espresso-based beverages offering, driving lunch sales with new products like its grilled cheese sandwich, and focusing on its new pay-and-go app.

In its effort to double down on digital innovation the company announced the appointment of Josh Kobza, former chief financial officer, to the new role of chief technology and development officer. Matthew Dunnigan, who has been the company's treasurer since 2014, is taking over the CFO role.

The lacklustre sales are part of the background to an ongoing dispute between the company, known for drastic cost-cutting measures at the chains it acquires, and the Great White North Franchisee Association, which formed in March 2017 to give voice to frustrated restaurant owners.

Most recently, the group accused RBI of failing to help Ontario franchisees offset a roughly 20 per cent increase to the minimum wage with a 10 per cent price hike on all menu items.

RBI, which sets the maximum price franchisees can charge, has not given in to these demands. That lack of action forced some franchisees to claw back employee benefits, like paid breaks, the GWNFA has said -- and sparked protests and a boycott from some concerned customers.

CEO @TimHortons parent $QSR on Q4 call has so far lauded the "dedication" of franchise owners 3x... zero mentions so far about how many of them are furious with the company for failing to help them deal with a higher #minimumwage (Credit Suisse sez wage hike = ~$100,000/yr/store)

Many @TimHortons franchisees want to raise prices to cover the costs of higher min wages, but $QSR CEO not budging: "We change price from time to time and we look at a variety of input factors to consider the price we take and that hasn’t changed"

The business faces different inflation pressures each year, he said, and re-iterated RBI's line on helping franchisees grow their profitability.

"We continue to support our restaurant owners and we want to drive profitable growth for them and the business for the long run."

Schwartz repeated the same sentiment when asked how the company would avoid similar negative publicity in B.C. where the provincial government plans to raise the minimum wage to at least $15.20 by 2021.

When later asked by an analyst whether the business has seen any impact from the media attention it received over the minimum wage issue and how the company plans to offset labour headwinds, Schwartz repeated that the company's primary objective is to drive sales growth to offset any cost inflations.

The Tim Hortons "business is strong, the brand is healthy and we're working closely with our restaurant owners to drive sales for many years to come to offset any cost inflation that we may face," he added.

RBI, which keeps its books in U.S. dollars and is also the parent of Burger King and Popeyes Louisiana Kitchen, said it earned US$395 million attributable to common shareholders or $1.59 per diluted share in its most recent quarter.

Analysts on average had expected a profit of 57 cents per share, according to Thomson Reuters.