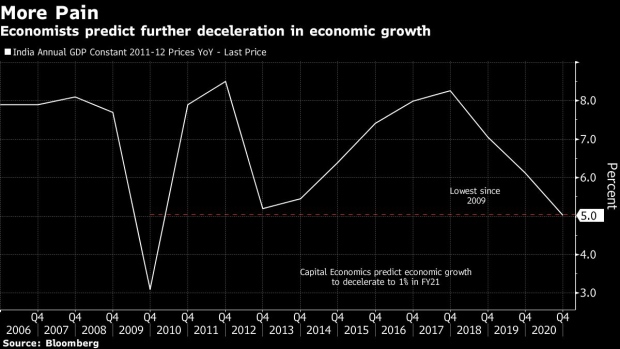 “In a war, we have to borrow from our future,” said Narayan, now a professor at Mumbai-based SP Jain Institute of Management & Research. “In the short term, we will need to print and spend to fund our war against Covid-19, sustain critical services, give relief to daily wage earners, and give forbearance to banks and businesses. All this at a time when our tax revenues will plummet.”

India’s economy is poised to shrink next quarter, and full-year expansion is set to suffer, as a three-week nationwide lockdown that started Wednesday brings activity to a standstill. Central banks across the world are looking at other options as conventional policy ammunition runs out. The Reserve Bank of Australia announced the purchase of government securities to keep yields down, while the Bank of England restarted quantitative easing as part of the virus response.

“It doesn’t matter if the RBI buys directly or in secondary or transfers surpluses to the government, It’s all monetization in effect,” said Narayan. “Given the global and domestic context, we do have a small window to do this.”

A government law allows the authorities citing unprecedented circumstances to use the escape clause under the Fiscal Responsibility and Budget Management Act and get the RBI to directly fund the deficit.